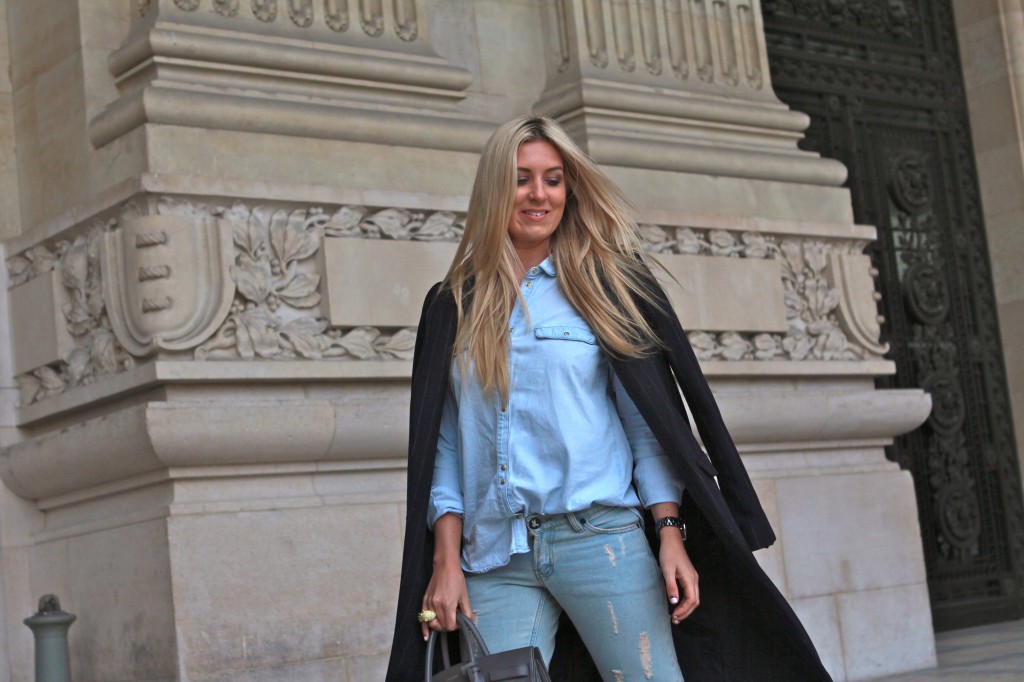 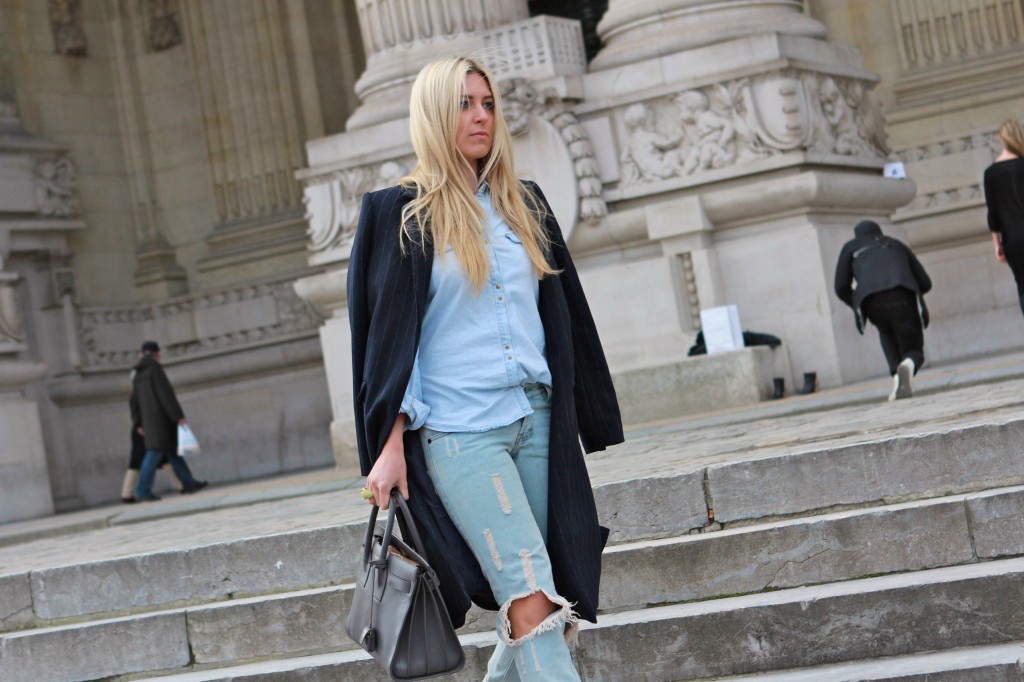 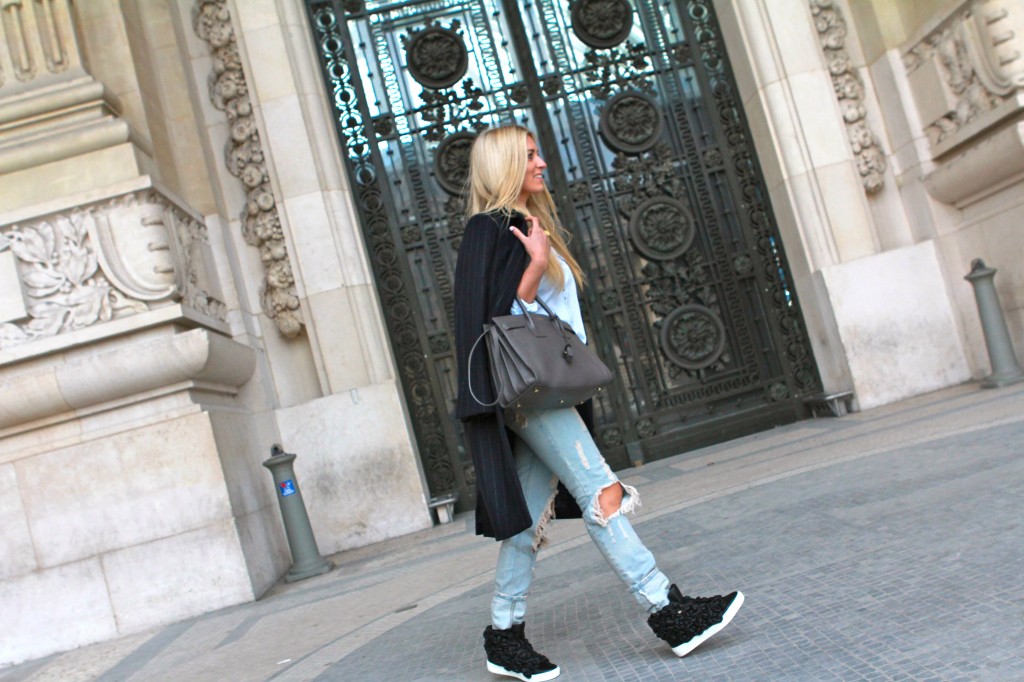 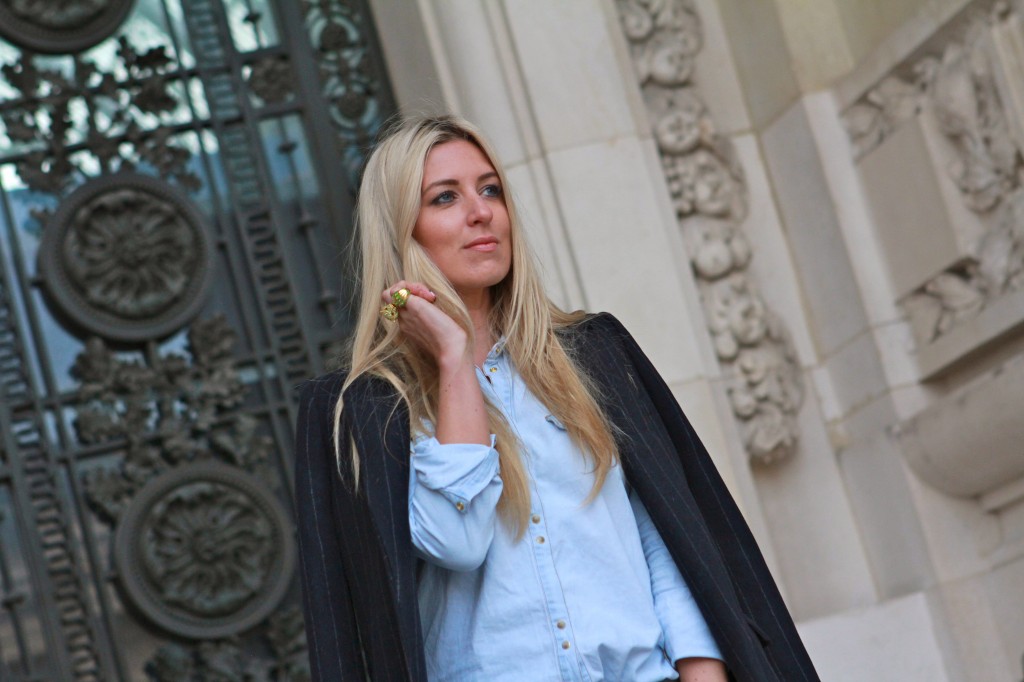 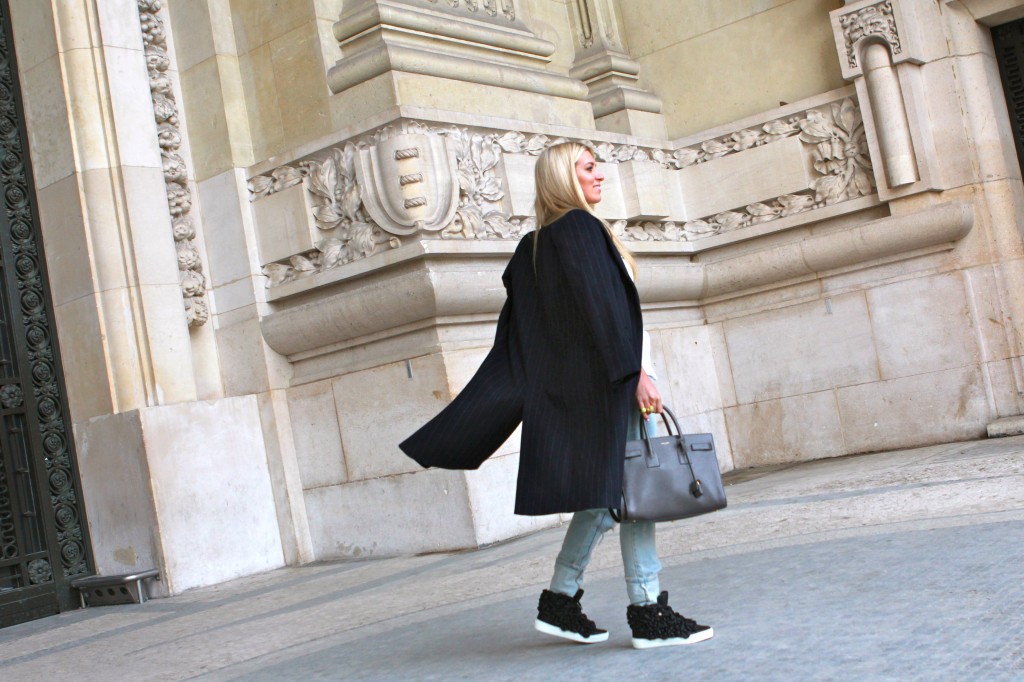 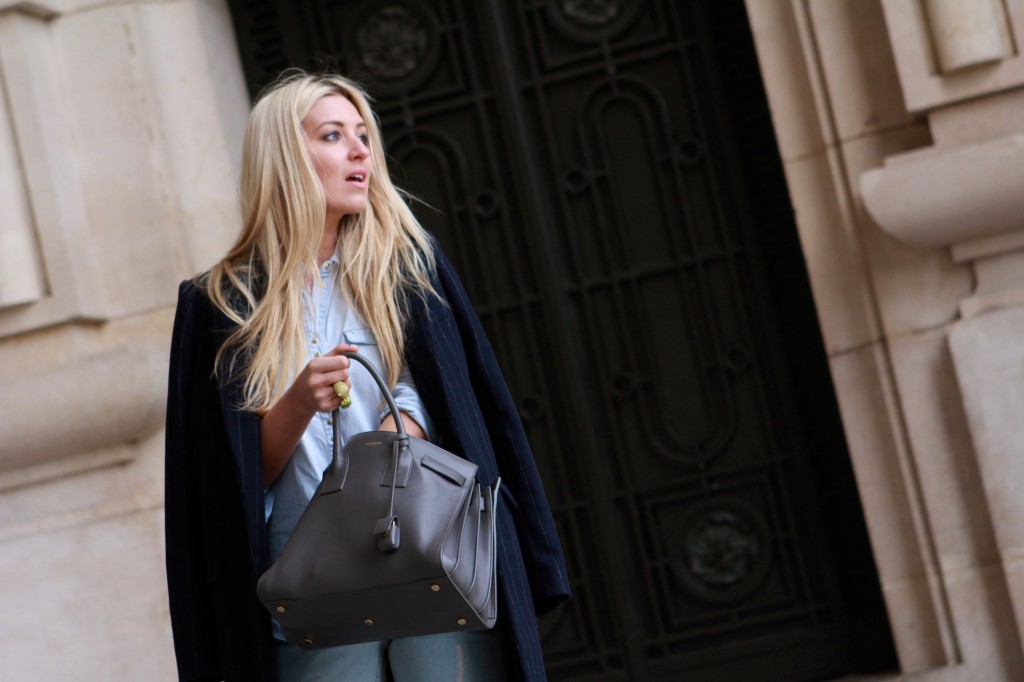 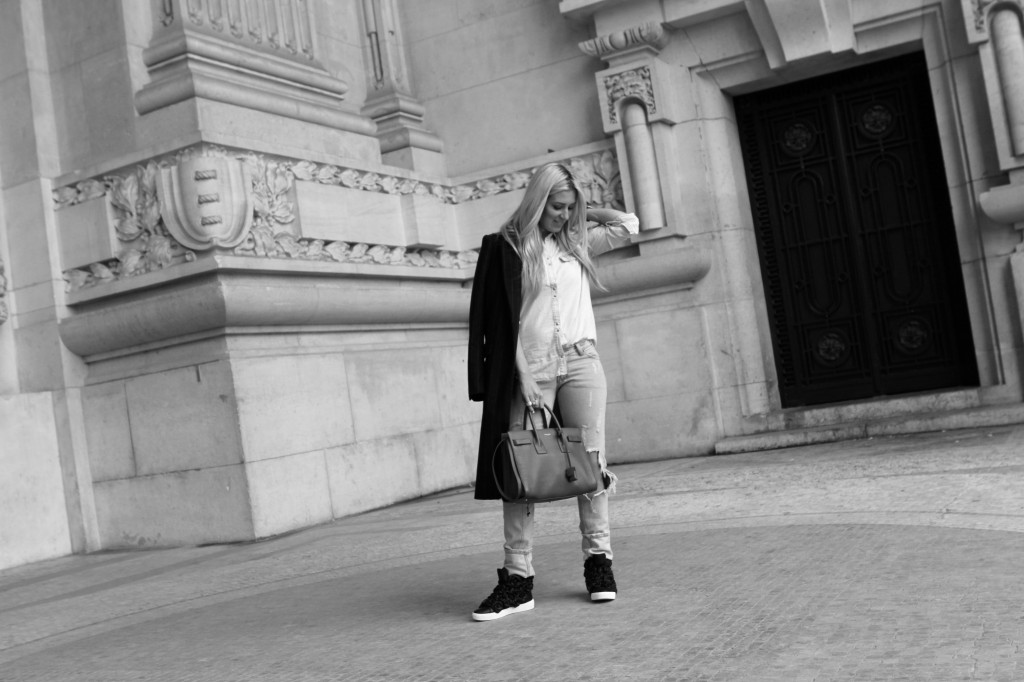 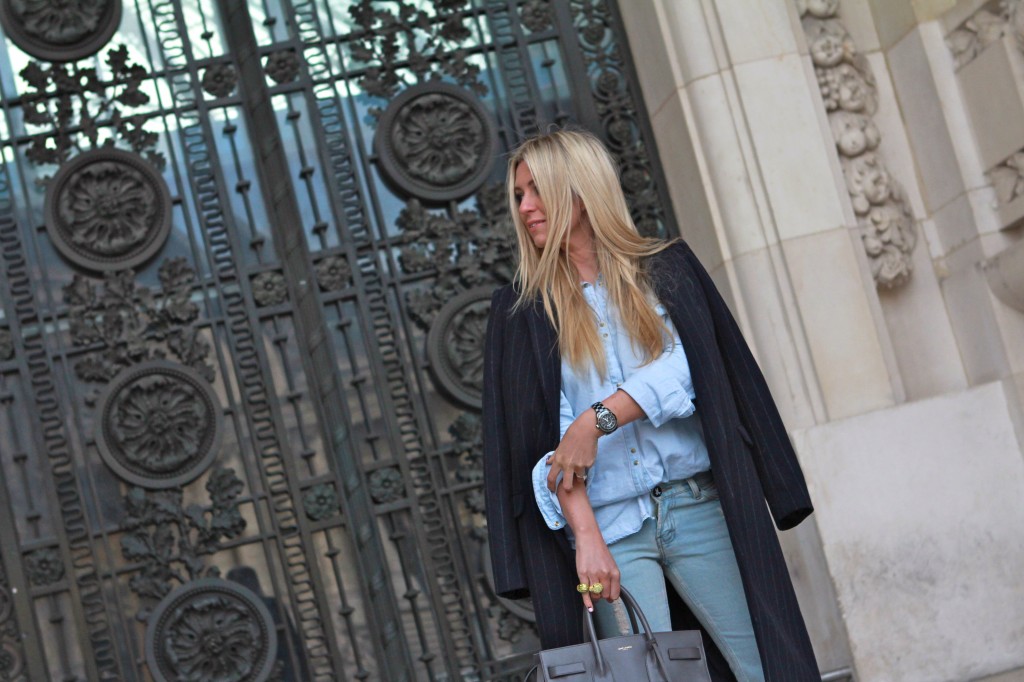 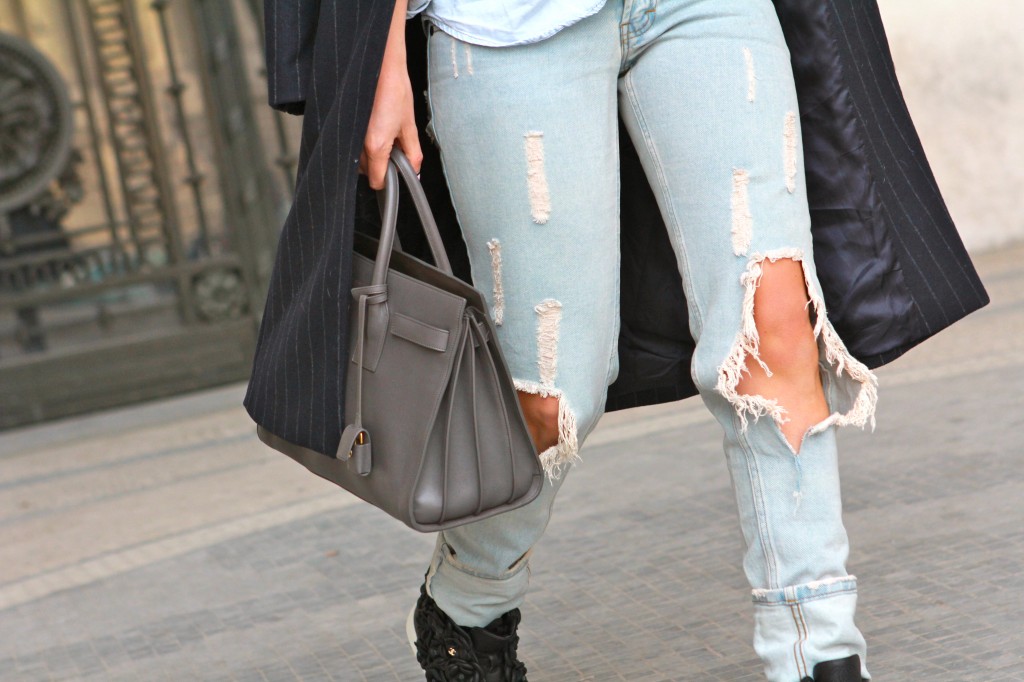 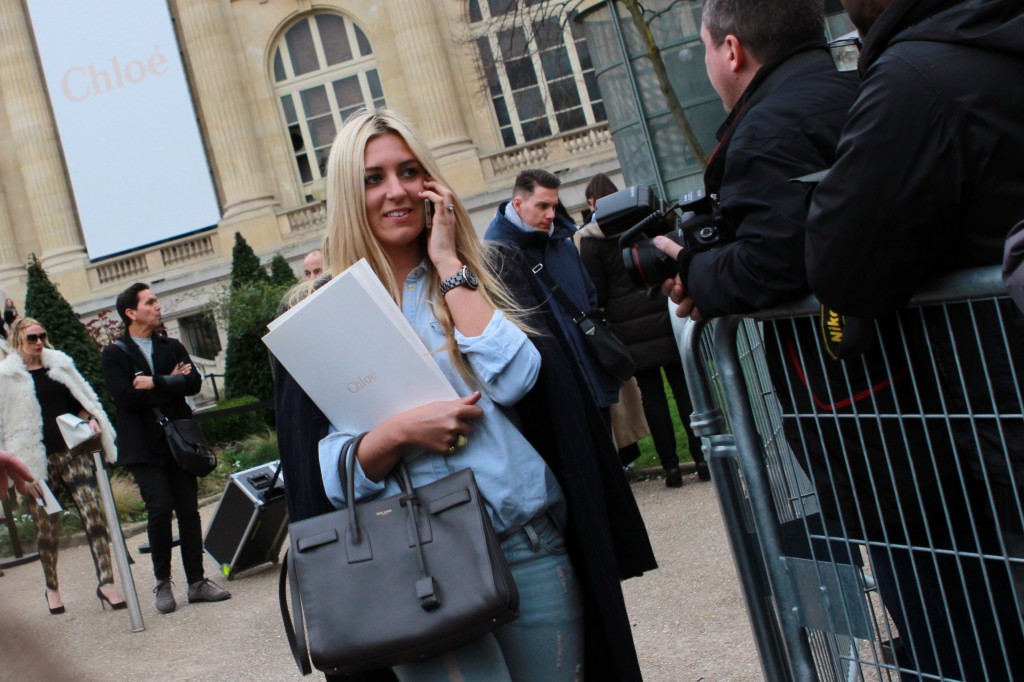 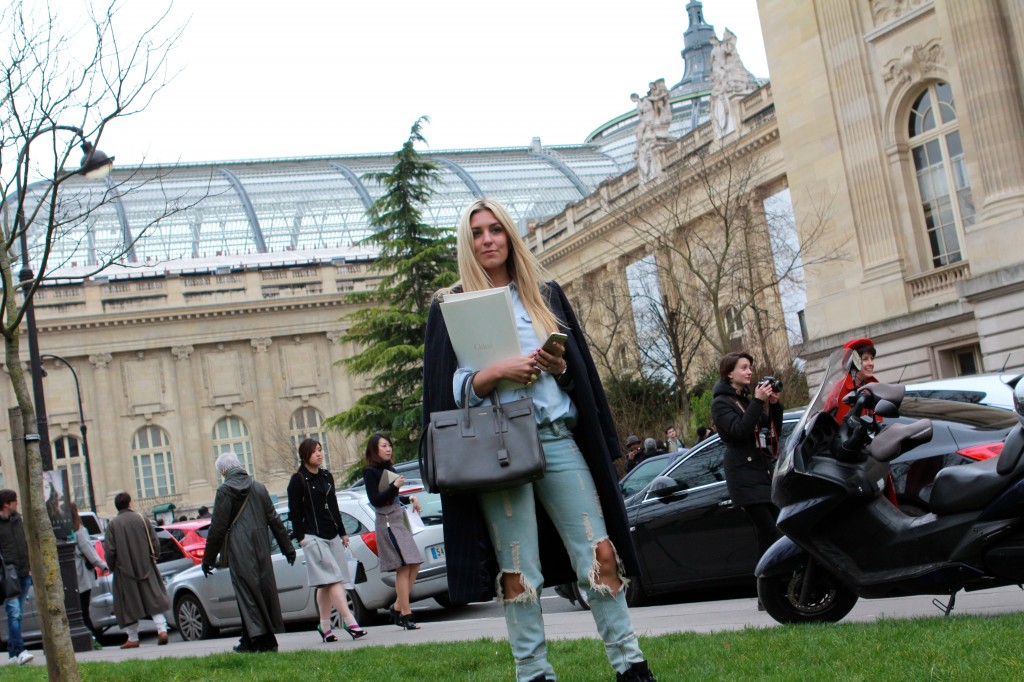 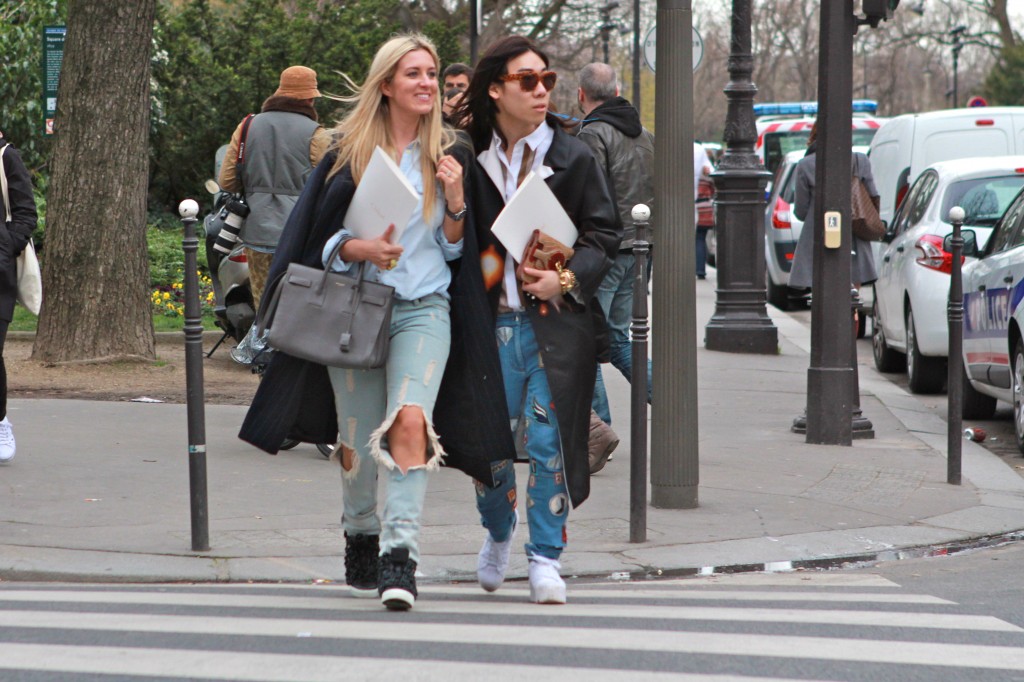 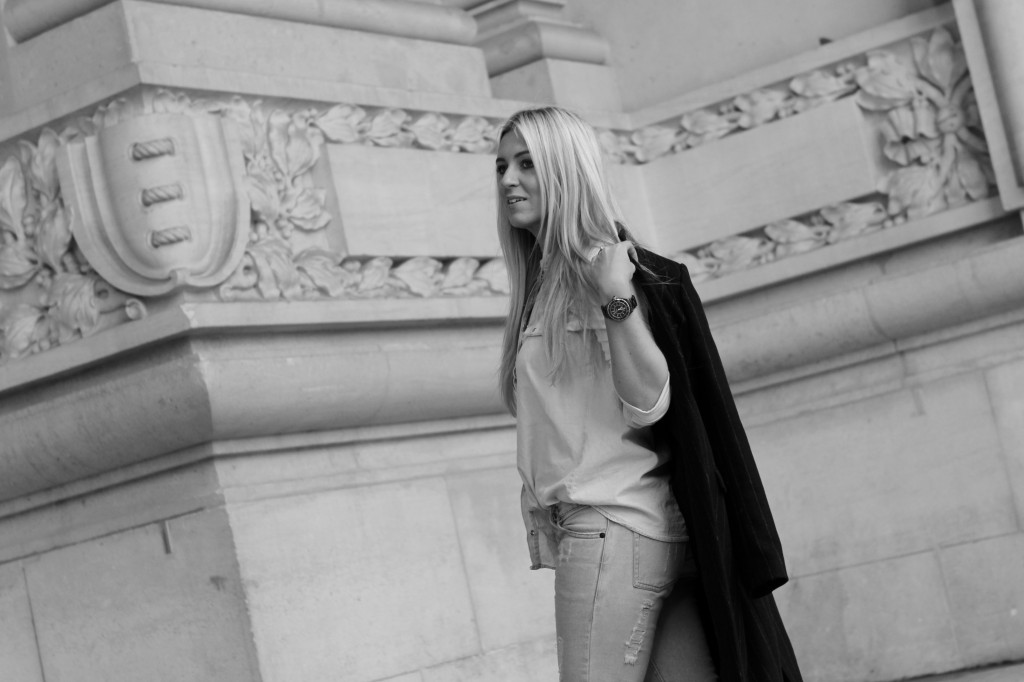 This look was from Paris Fashion Week before the Chloe AW14 show. My outfit was inspired from one of the looks at the JCrew presentation in NYC. I love denim on denim, the more denim the better! I barely wore heels in Paris my feet were done after NYC and London, so I was comfy and able to rush around. This was the first time I wore my Chanel Camellia sneakers. I wanted these sneakers for a long time but couldn’t bare paying £1200 for sneakers, actually I would hate to pay that for a pair of shoes. When I saw them a year later in Harrods I just grabbed them so it was technically an impulse buy but not really. I purposely paid cash of these shoes to make me physically see how much money I was spending, as it’s so easy to pay with plastic it almost makes me feel like I am not spending my money. My tip is to try and pay for as much as possible in cash so you can see the real money in your hand that you are parting with. I don’t buy any luxuries with a credit card, if I haven’t got the money then I can’t buy it. Plus I would be dangerous with a credit card once I got started!

My jeans are by One Teaspoon, the shorts are my total fave and the jeans are just as good. I just wish it was cheaper to imported them!

This was also the first time I used my Saint Laurent Sac Du Jour. I fell in love with this bag when I first saw it, a lot of people say it is too similar to a Birkin and maybe it is, who cares. It was a really practical bag and the perfect size for me, I also love the huge one and thinking of buying one in a bright colour and I also love the Mini. I was extremely lucky with this bag because grey was the colour I wanted but it had sold out everywhere, however I found it at Designer Exchange. The condition was pretty much like new but was basically two thirds of the price brand new .I snapped it up immediately and this was probably when I fell in love with Designer Exchange. Before DEX I never really shopped at pre loved stores for bags because it never feels like new and just doesn’t feel the same as buying it from the brands store. However with DEX there stock is seriously so good, everything is in amazing condition too. More importantly I know everything is 100% authentic. I like to think I can spot a fake from the real deal with any brand but still with DEX I know I do not need to worry. They have a professional authenticator that checks every bag before it is bought in. The store gives great service and feels just the same as buying from any other designer store. The only bad thing I have to say about DEX is the stock sells too fast, I have lots count on the amount of times I have seen a bag on instagram and it has sold after five minutes and I am too late, so if you see something you like then be quick!

So the Chloe show; the location was grand and beautiful I was extremely impressed, it felt very special to attend this show. When I go to shows I notice so many people that sit down in the empty seats when they are meant to be somewhere else.  Personally I do not care where I sit sometimes I stand even when I have a seat because I can capture better photos. For this show I was late (as usual) and someone was sitting in my seat, I told him it was my seat and to my surprise he said “well I am here now” OK thanks! So there was me wondering around trying to find somewhere to sit, I really felt like everyone was looking at me and felt so awkward. I found a seat that was second row but had a gap in front where the front row was so I basically ended up in a really good seat, thanks to the rude man. Talking of rude people, I meet SO MANY rude people over fashion week, I feel like saying to them (I have been known to say this actually) “yes it’s fashion and we are all meant to be thin and rude but get over your self and it’s ok to be nice”. I never spill the beans and name names because it could effect my career but in this case I do not care if I ever work or meet this person in the future because she was so rude.  The name in question is Anna Dello Russo! I was so disappointed to discover the real Anna behind the street style photos. To start no wonder why she is street styled so much, she hangs around before and after the shows for bloody ages! A lot of bloggers do this but I struggle to hover because I feel like a dick but thats the trick to be street styled; hang around until every photographer has seen you. Maybe I should suck it up and just do that but after five seasons I still can’t bare it. So Anna jumps on bikes, cars, fences anything to get an interesting shot and attention, lets just say you would never see VB doing this because she doesn’t need to. At this point I didn’t care she was seeking so much attention I thought good on her if thats how she needs to get photographed but when we were leaving the show thats when I was disappointed. There were so many people trying to exist the venue that we had to wait for 10 mins or so, sardined together. I was standing right up against Anna so I smiled at her a few times but she just looked me up and down and was more interested in seeing who was around her. Mid conversation why she was discussing with someone how hard it is to get featured in Italian Vogue but it is easy to get a feature in all the other Vogues I asked her for a photo because she was someone I admired and I wanted to show you guys the photo on here. She was so rude to me I was shocked. Since this day I have lost all my admiration for her and just see her as an over faked tanned attention seeker; Anna Dello Who from now on. If you are famous and push to be in the media then you should not be rude top your fans, simple.

Photos By Nathan Moy – The Provoker 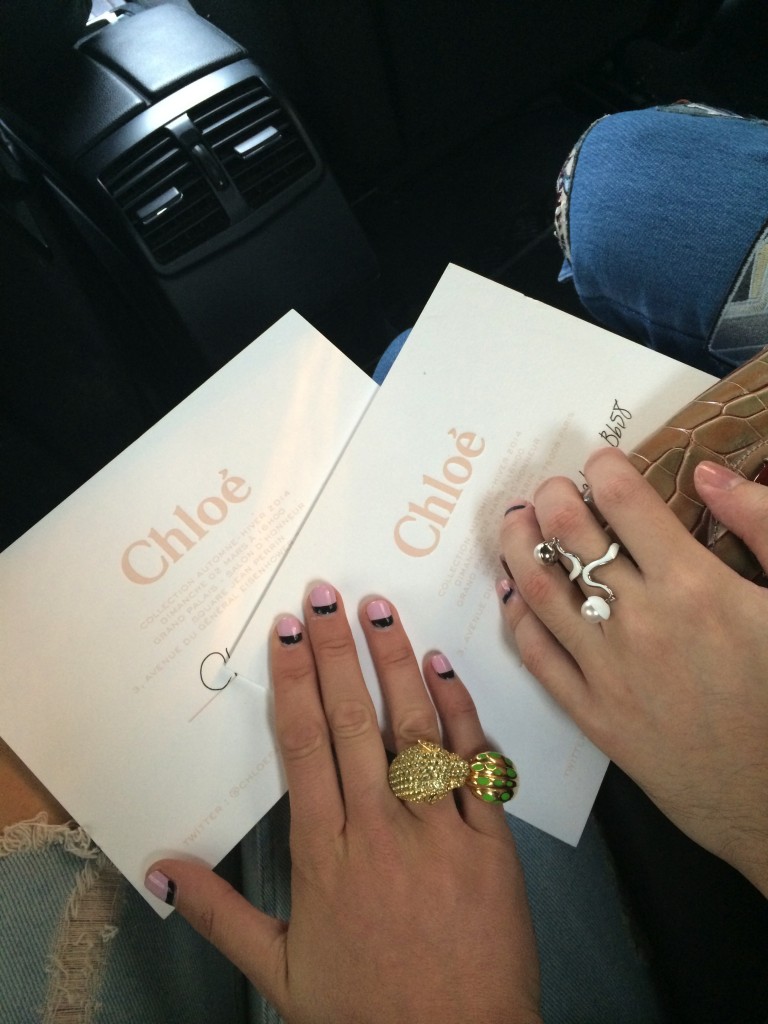 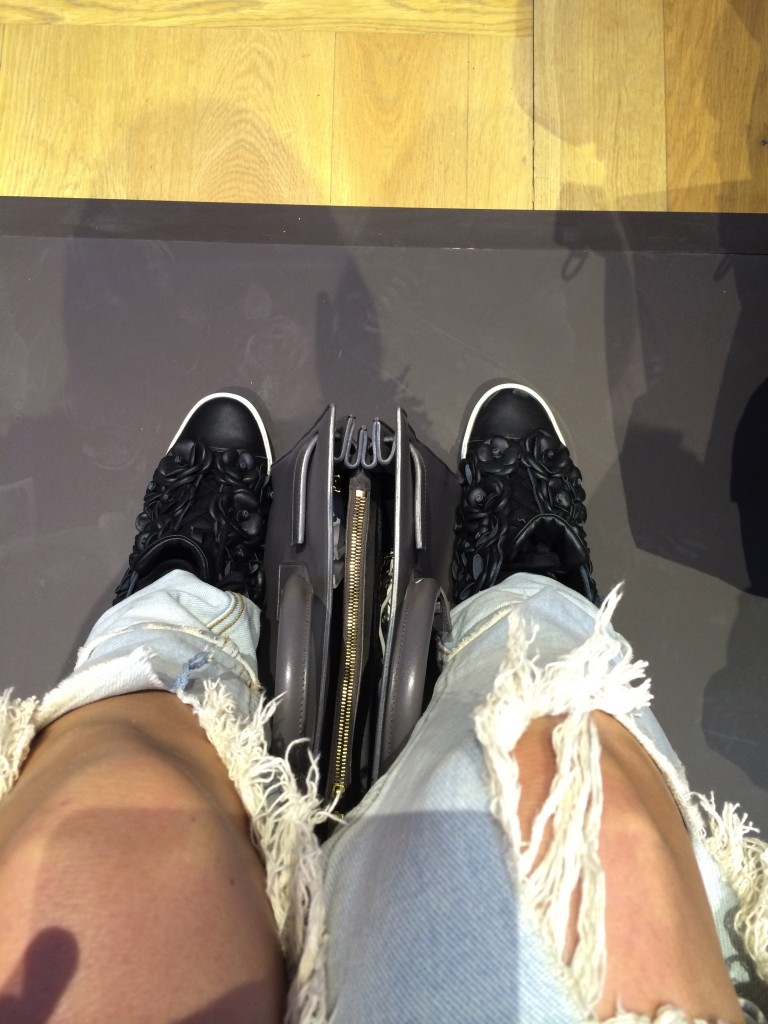 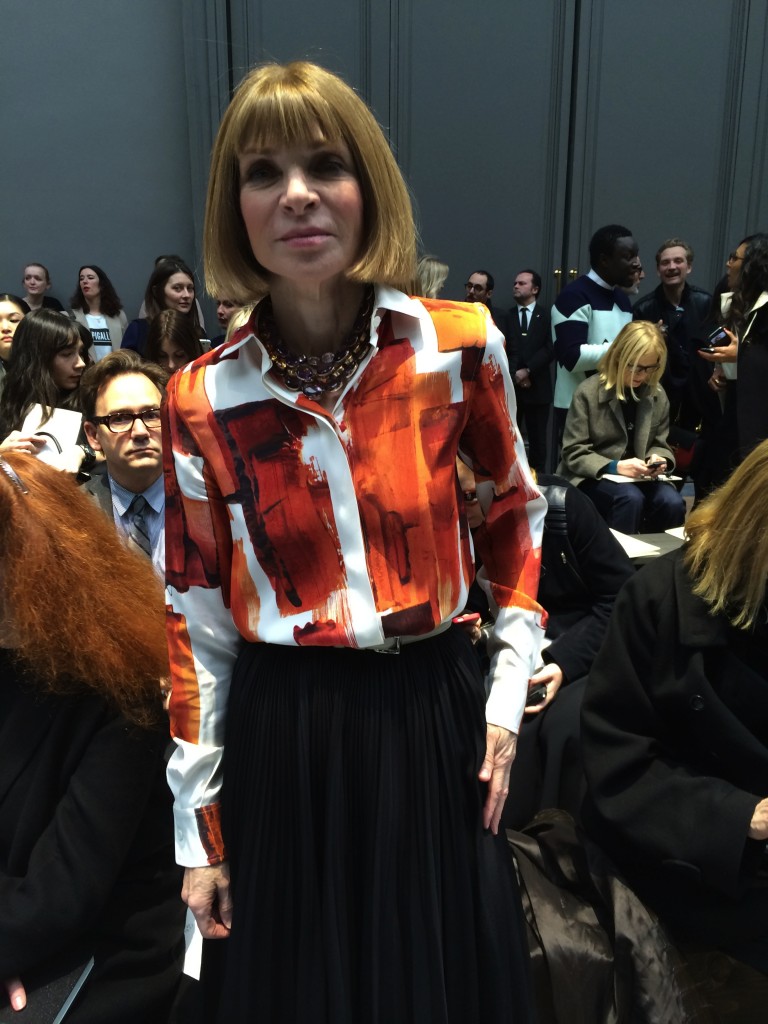 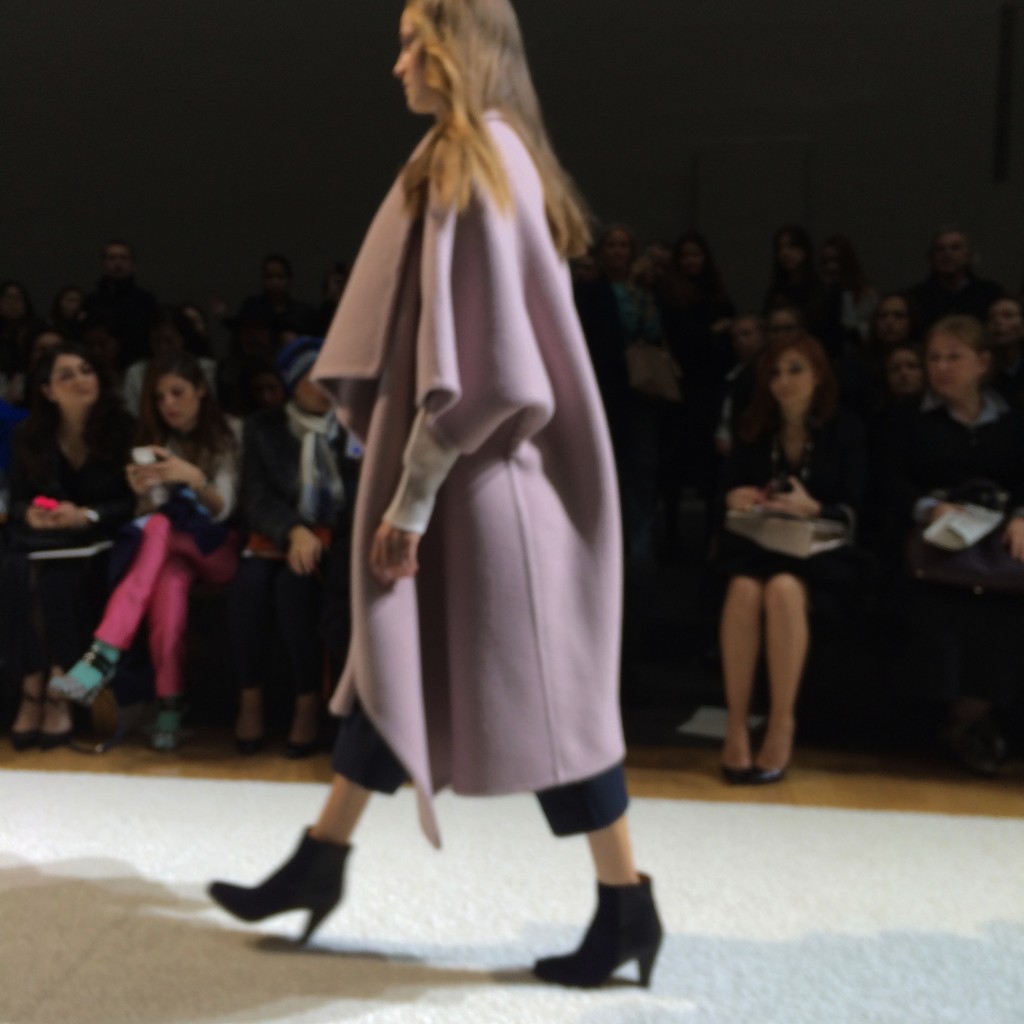 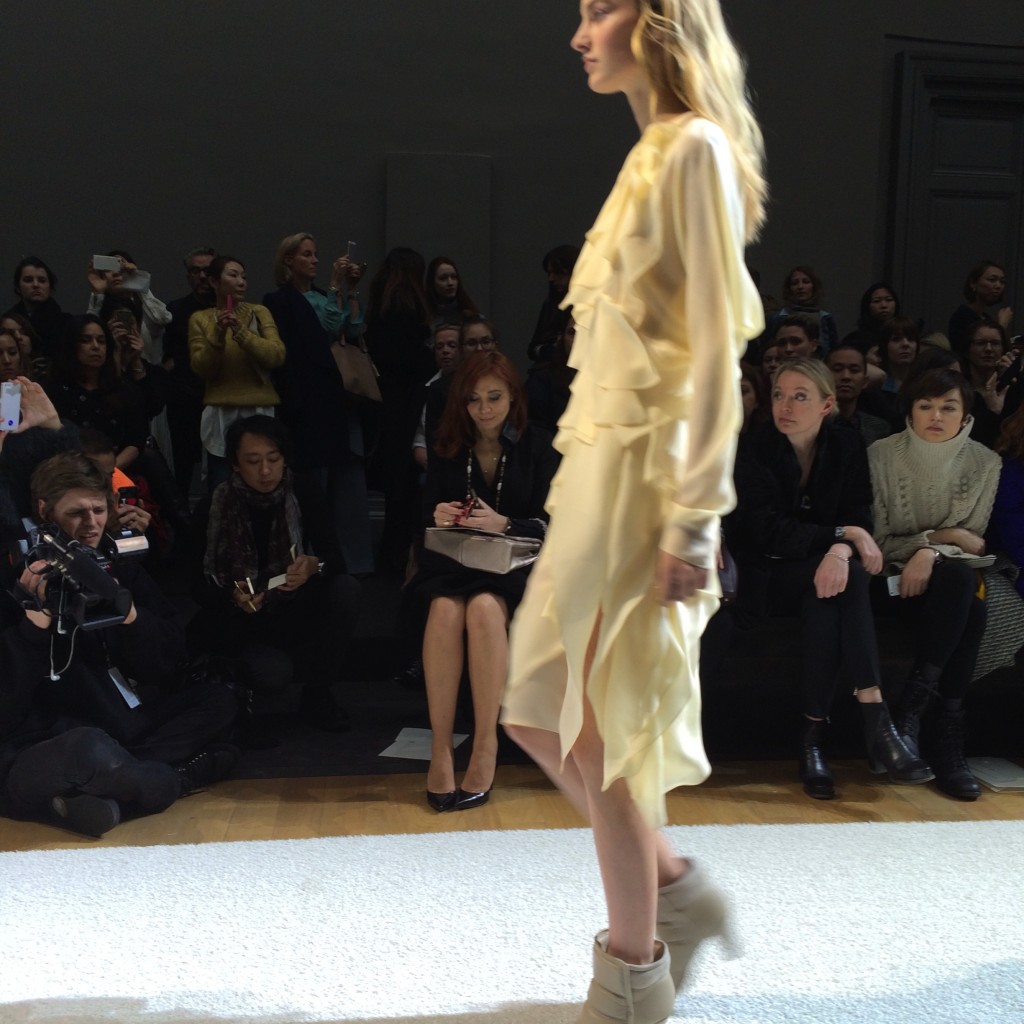 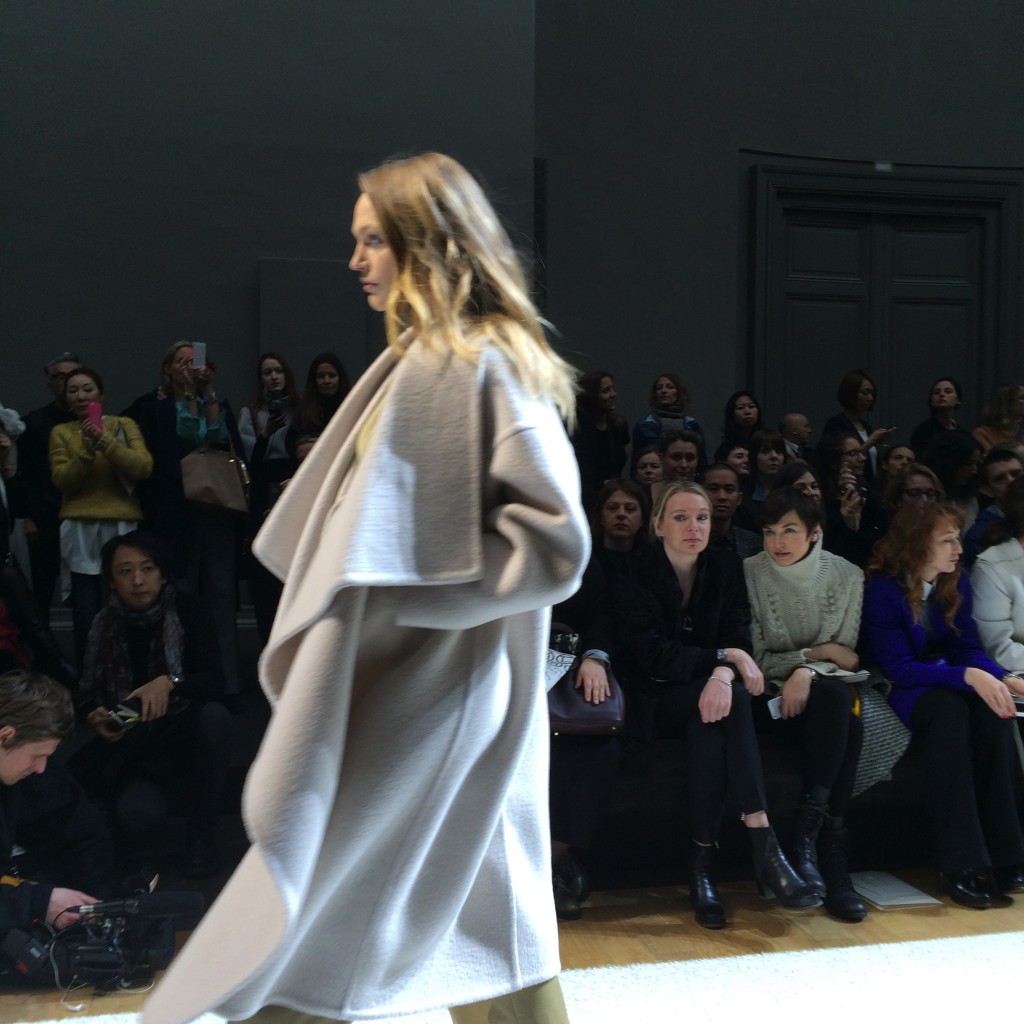 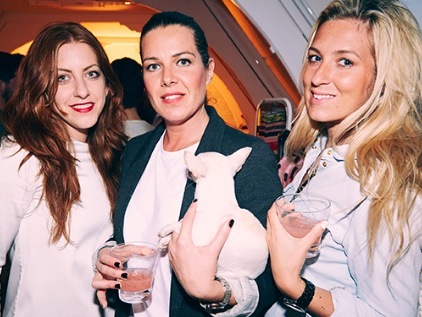 Omg can’t believe it!Why people are such a bunch of dicks when it comes to fashion?They think they are better than anyone else around them!Makes me laugh!
Yes they can be covered in designer from head to toe but money can’t buy class and manners!

Stay as humble and lovely as you are Claire!X