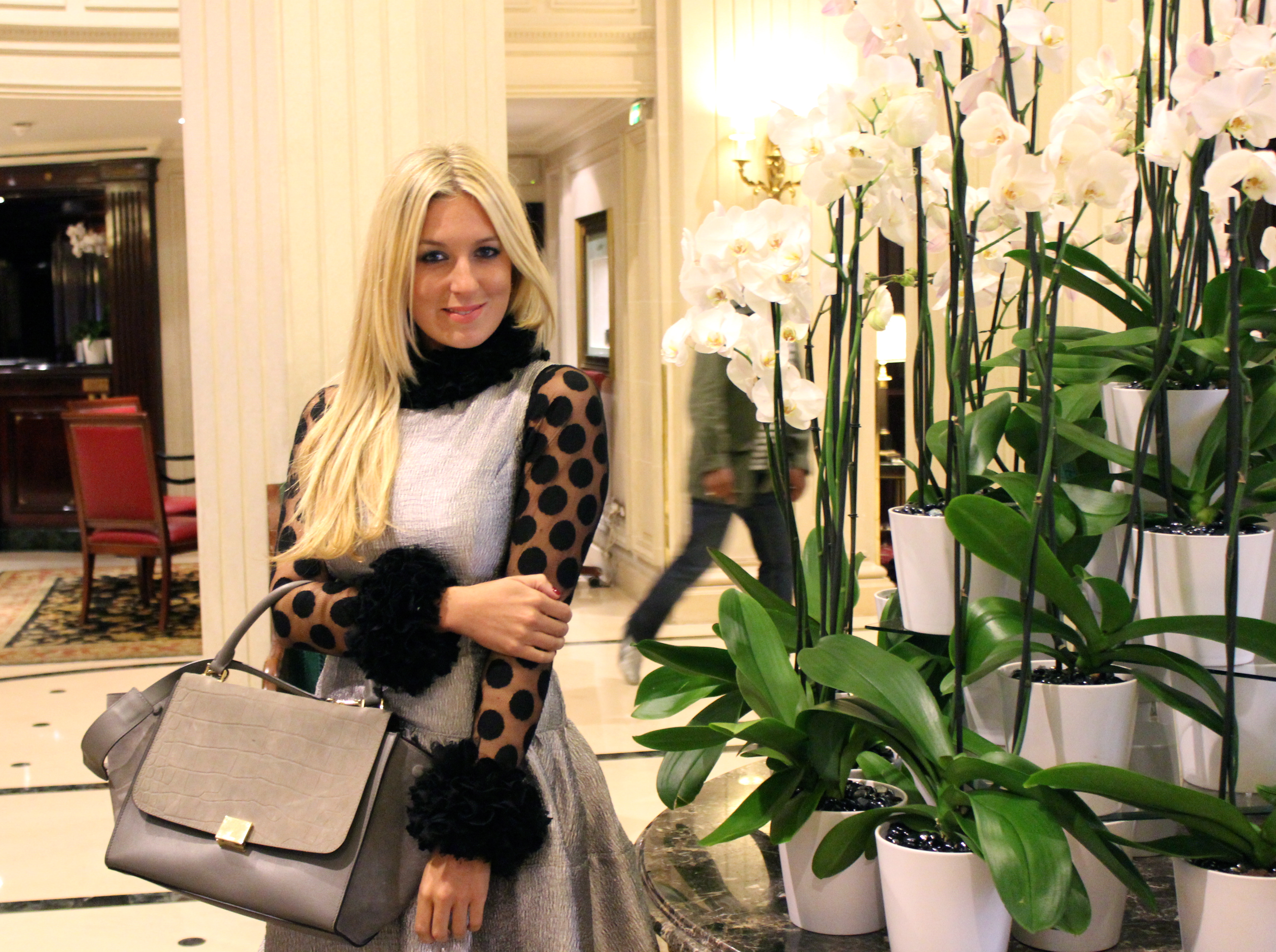 My final show I attended in Paris was the Shiatzy Chen show. I did not know what to expect as it was not a brand I was familiar with. However, I really wanted to try something different after researching the brand it looked pretty nice. Apparently the brand is referred to as the “Chanel of Taiwan.” 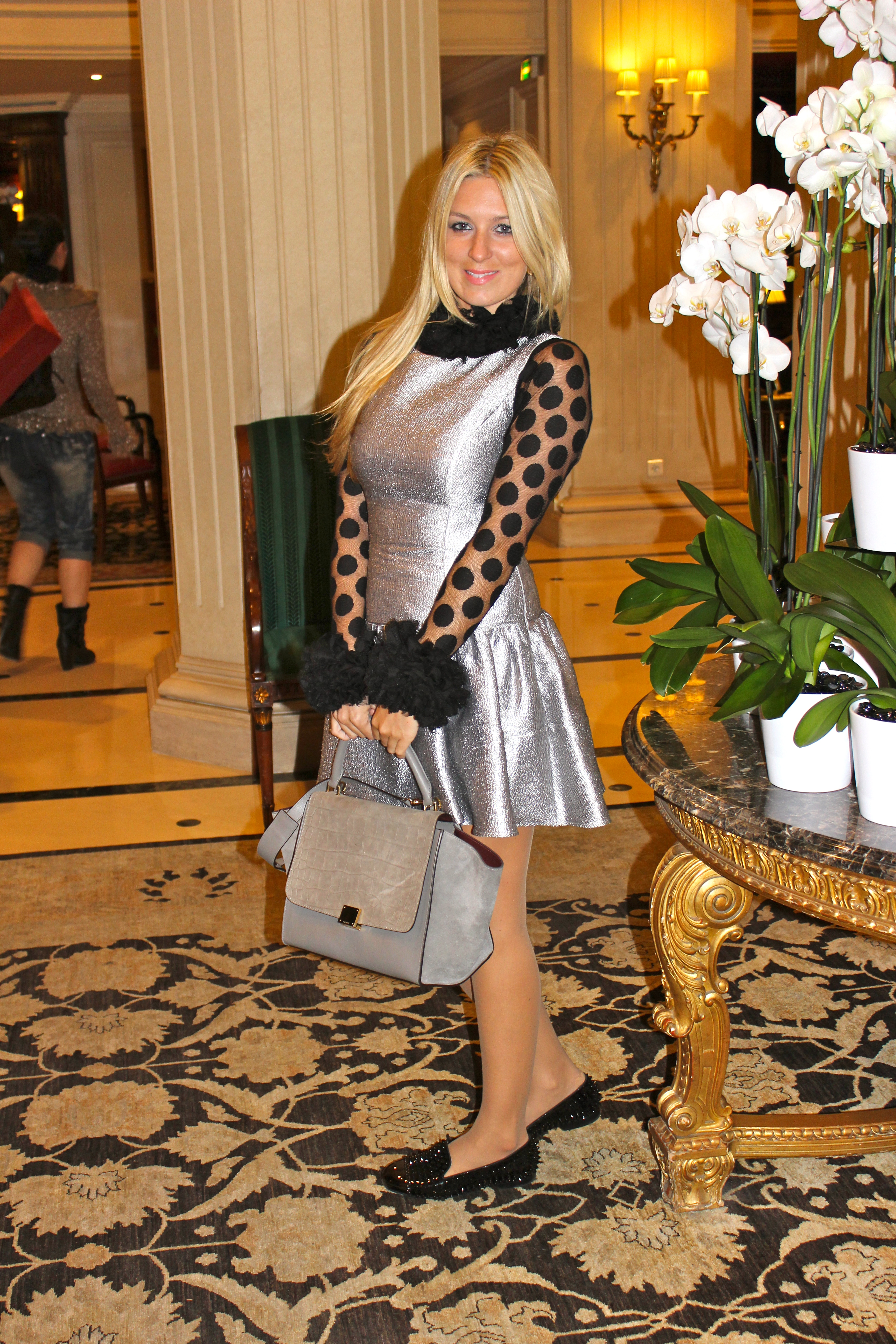 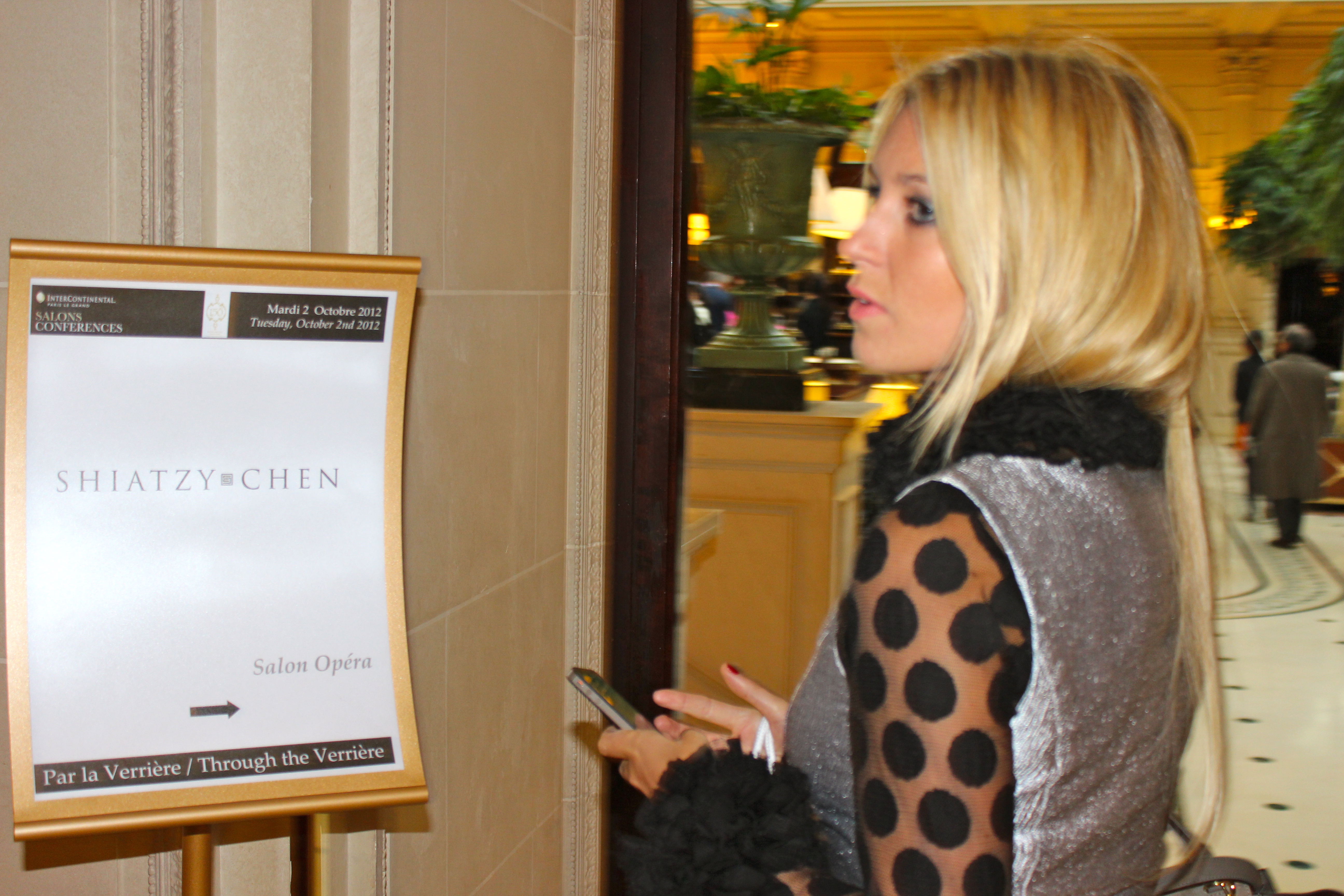 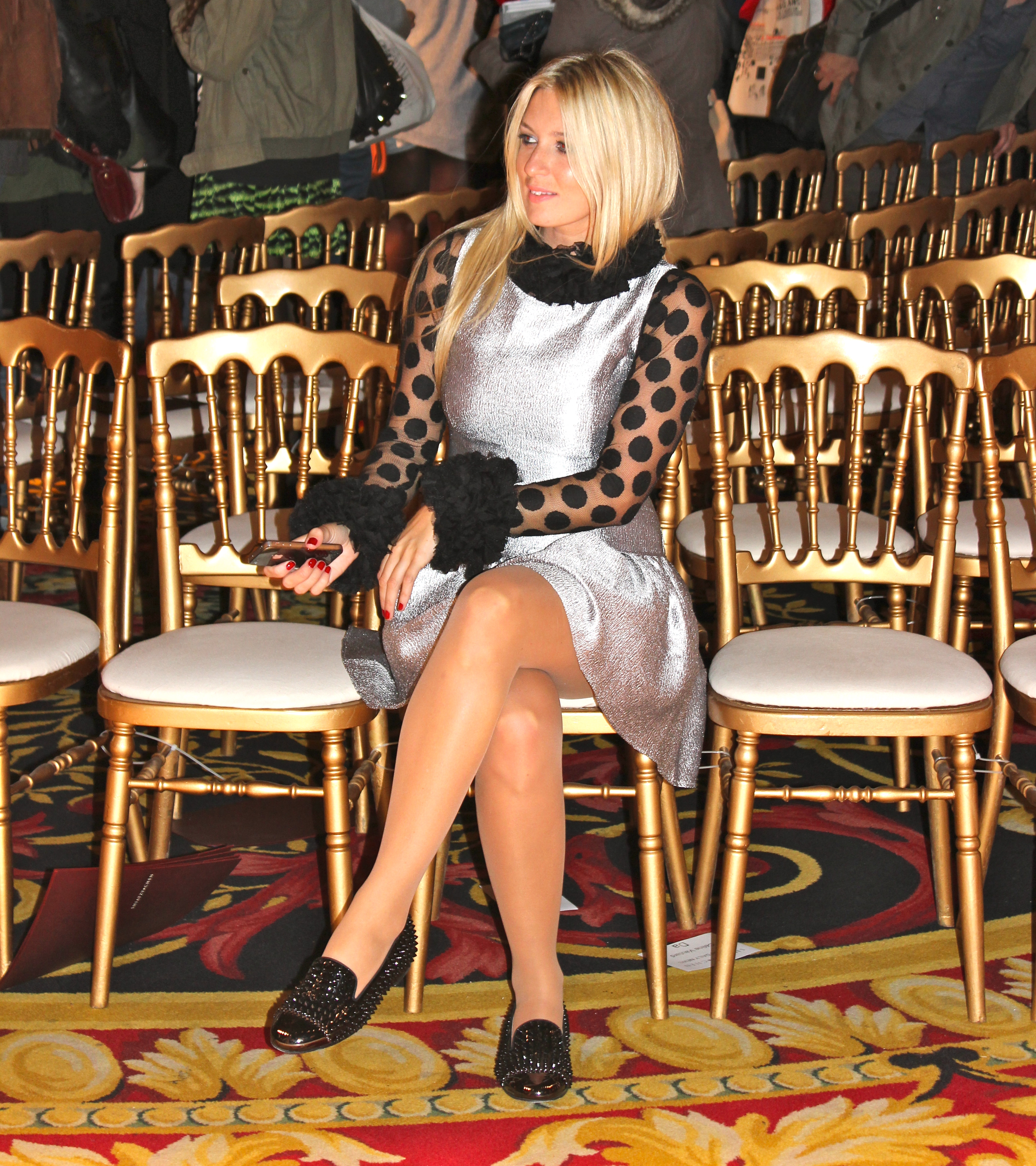 As you know my last visit was all crammed in one day! I managed to fit an extra outfit in my Céline Trapeze bag (which is quite small!) So I had to pick something light and foldable, as well as something comfy for traveling home. I did not want to bore you with two posts wearing the same outfit. Which outfit did you prefer; this one or the Manoush jacket with monochrome trousers?

When we arrived i was excited as the location was beautiful. There was a lot of chaos due to the “celebrities” there. Honestly I did not know who they were! They were very beautiful and wearing stunning gowns. Please someone tell me who she is?? 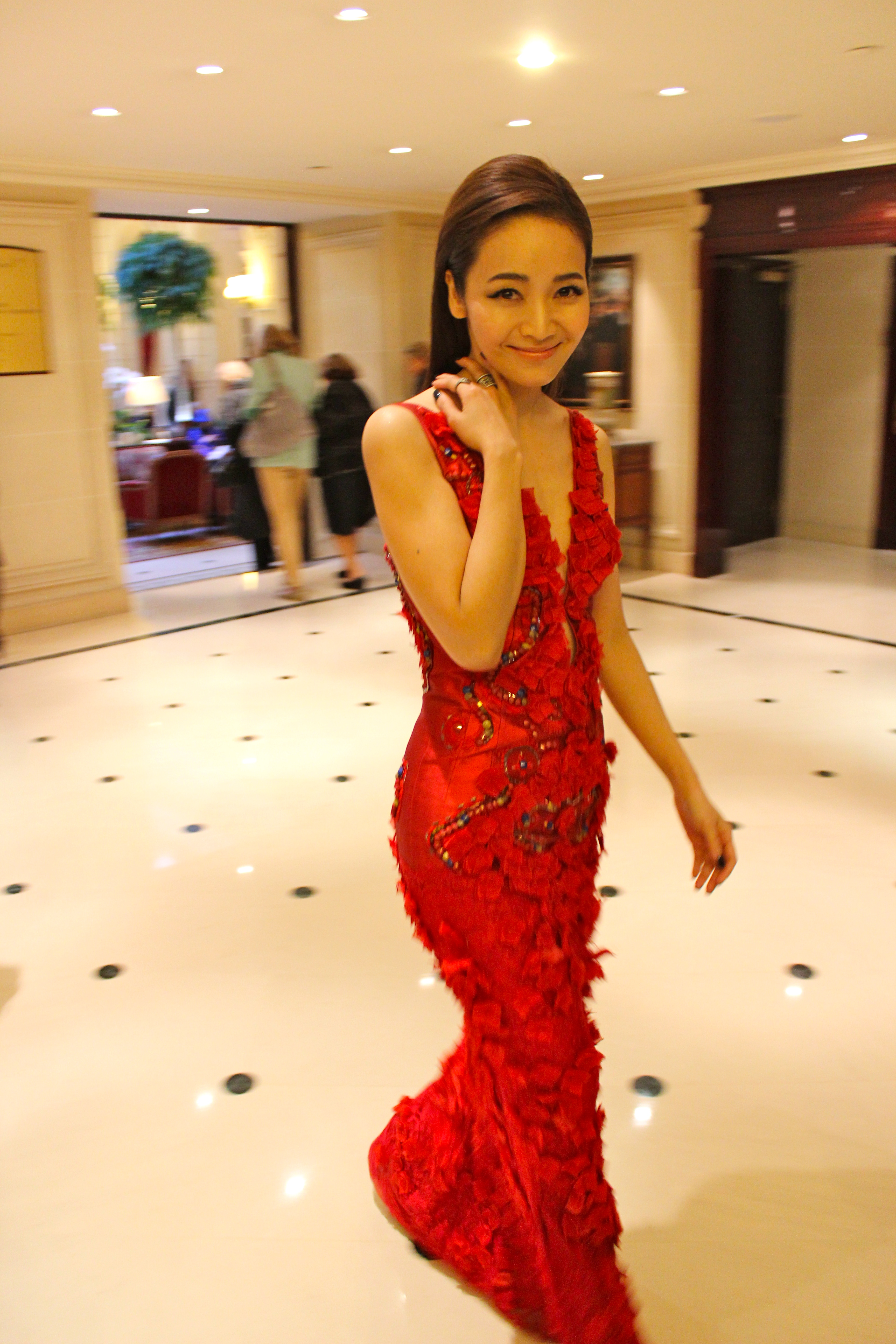 The show was in the most beautiful ball room; high ceilings with biggest chandelier ever. My favourite aspect of the show was the layout in a circle so everyone got a good view. We were sat with the press so we had brilliant seats and were able to capture strong photos from a good angle. 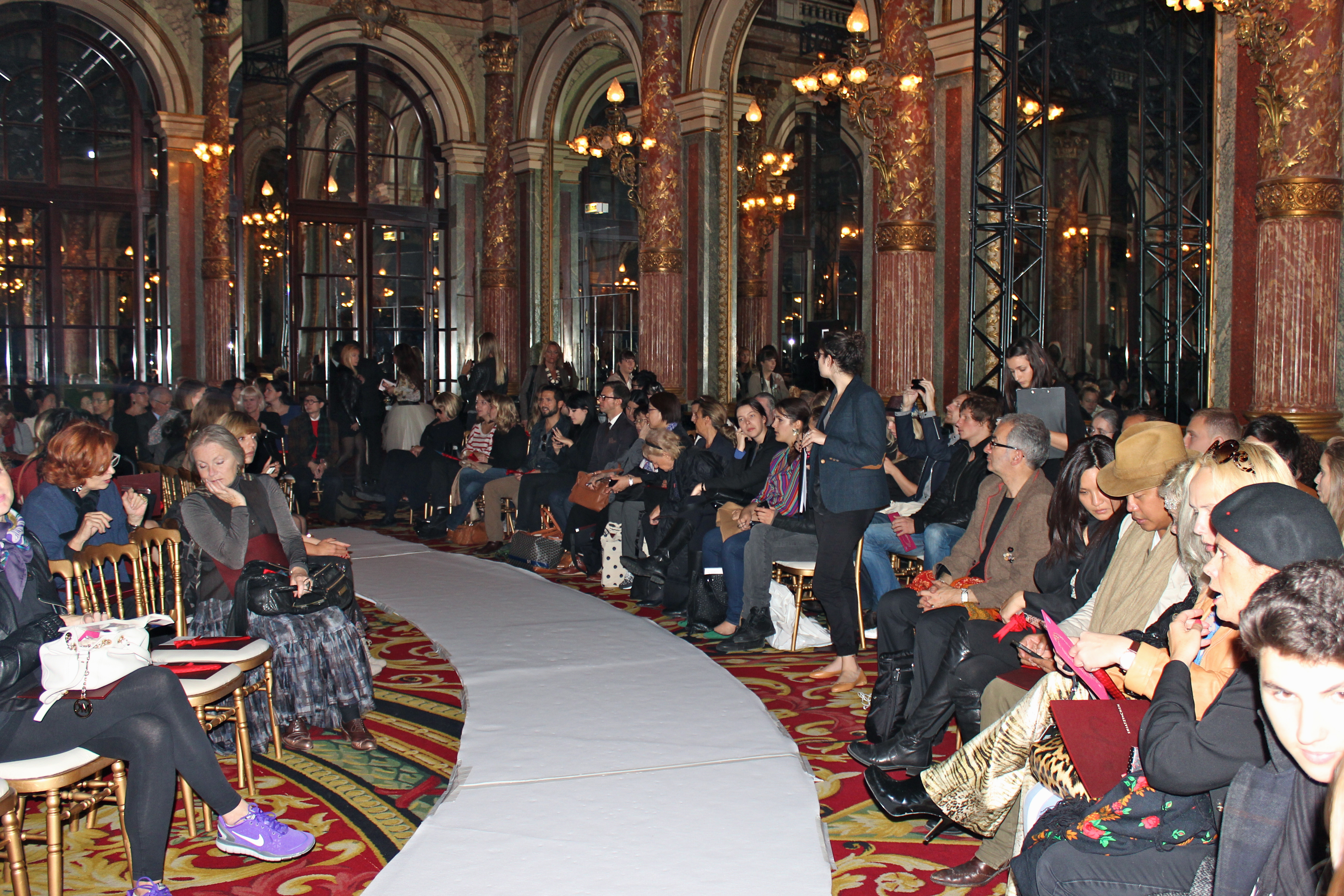 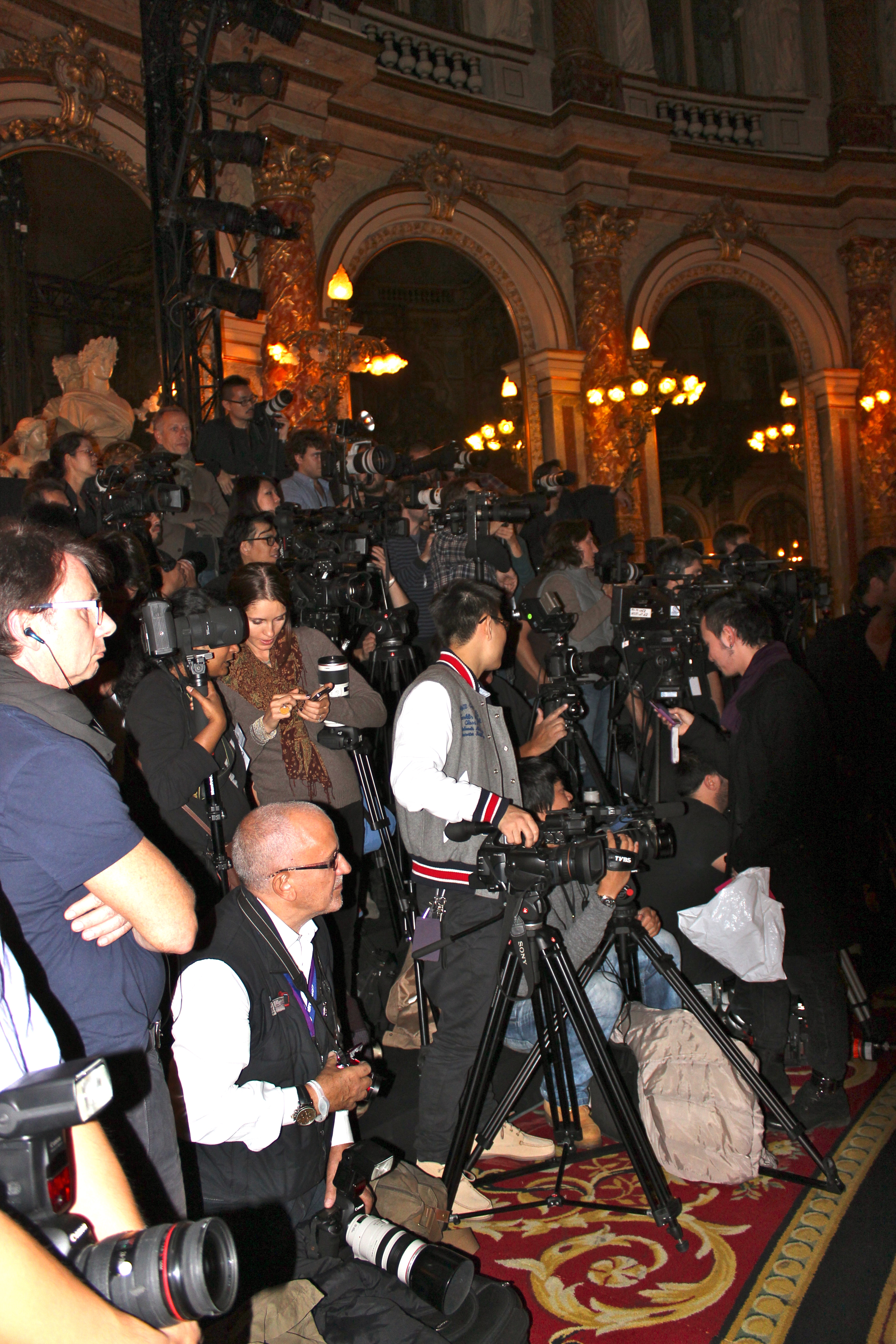 The collection was truly beautiful, original and wearable. There were some pieces I would  love to have. Especially this electric blue suit. What do you think of the detail on the back? 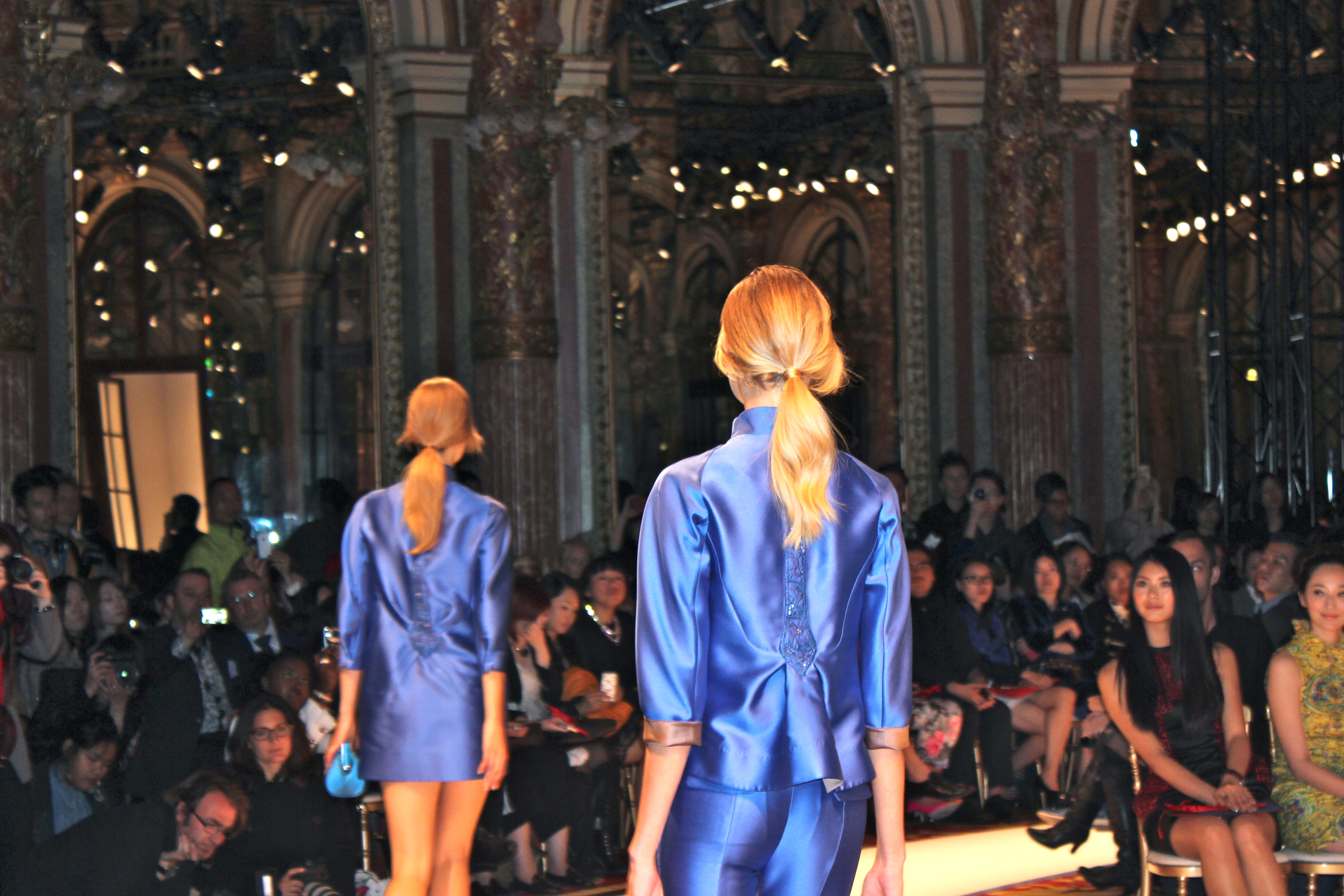 Do you recognise this model? Can anyone tell me who she is? 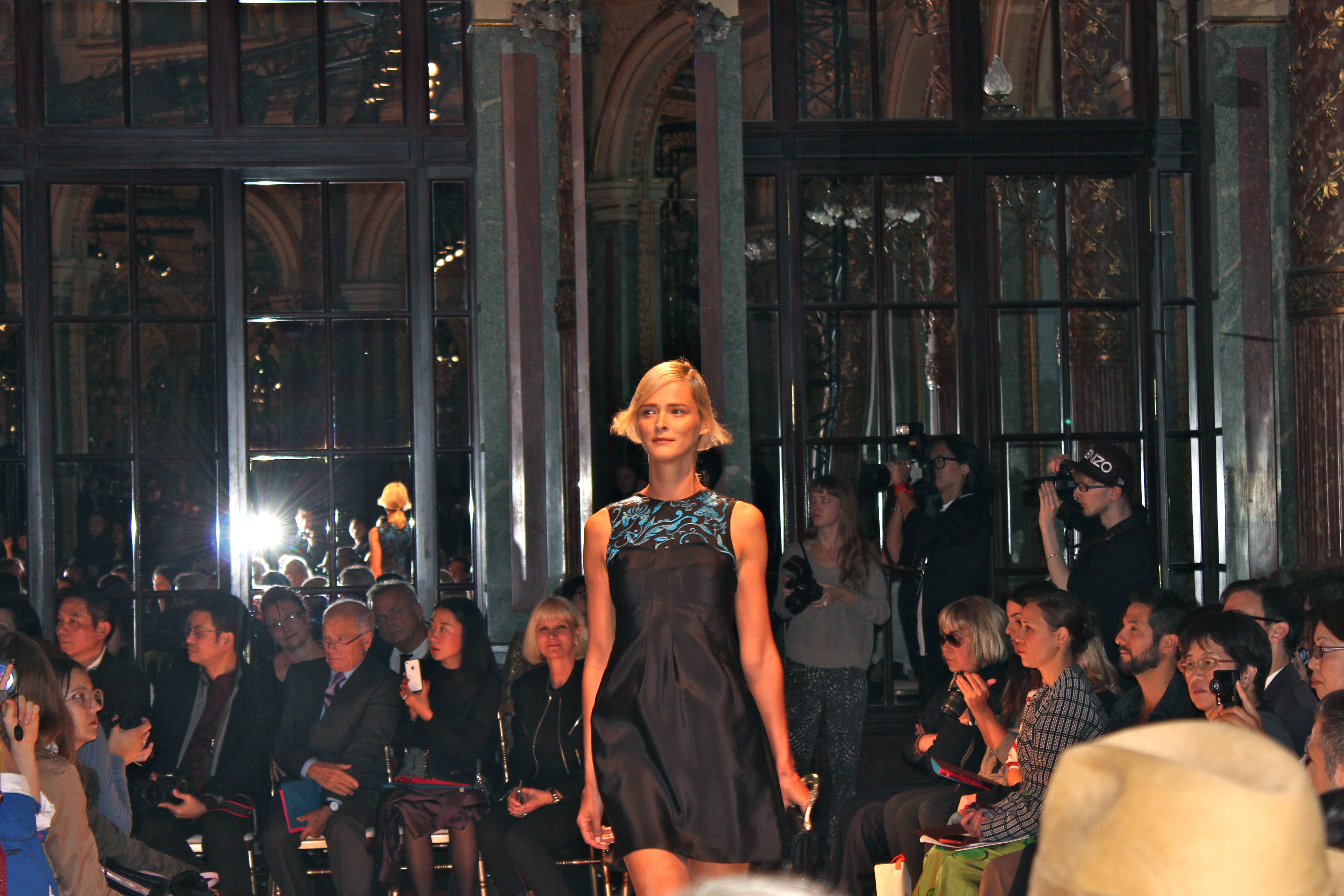 I loved the soft, romantic colours and the femininity of the collection. The collection was inspired by paper cutting from China. Paper cutting initially served the decorative and ritual needs of the working class and gradually developed from an emotional outlet to a widely accepted form of art. With paper cutting as the theme, Shiazty Chen’s SS13 collection “perpetually” narrates a beautiful story passed down through generations. By abandoning restrictions of space, three dimensional objects are layered and represented on one surface. Motifs include humans, animals, flowers, sceneries, or even rituals and historical events, some as fine as the delicate silkworm. 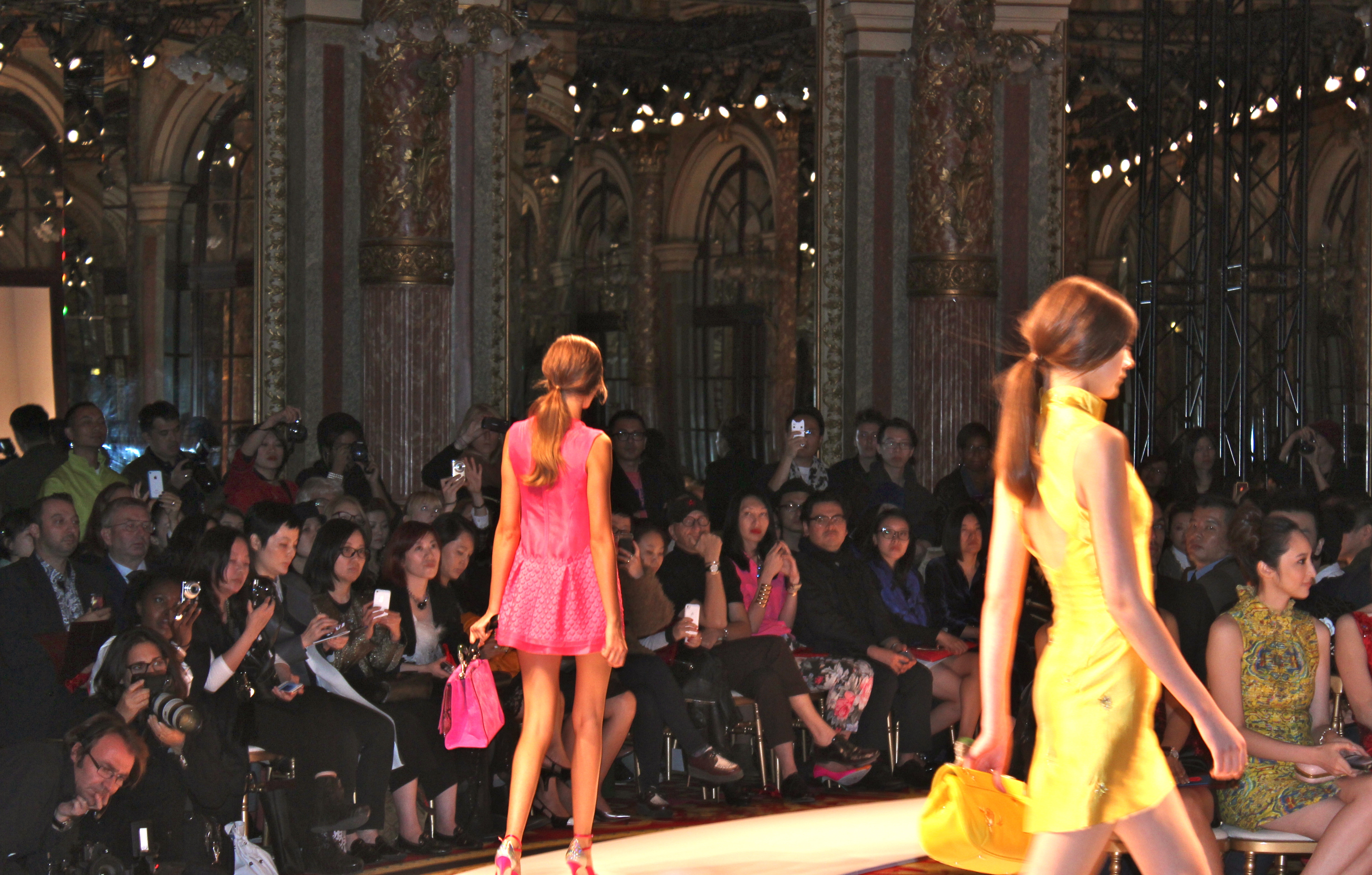 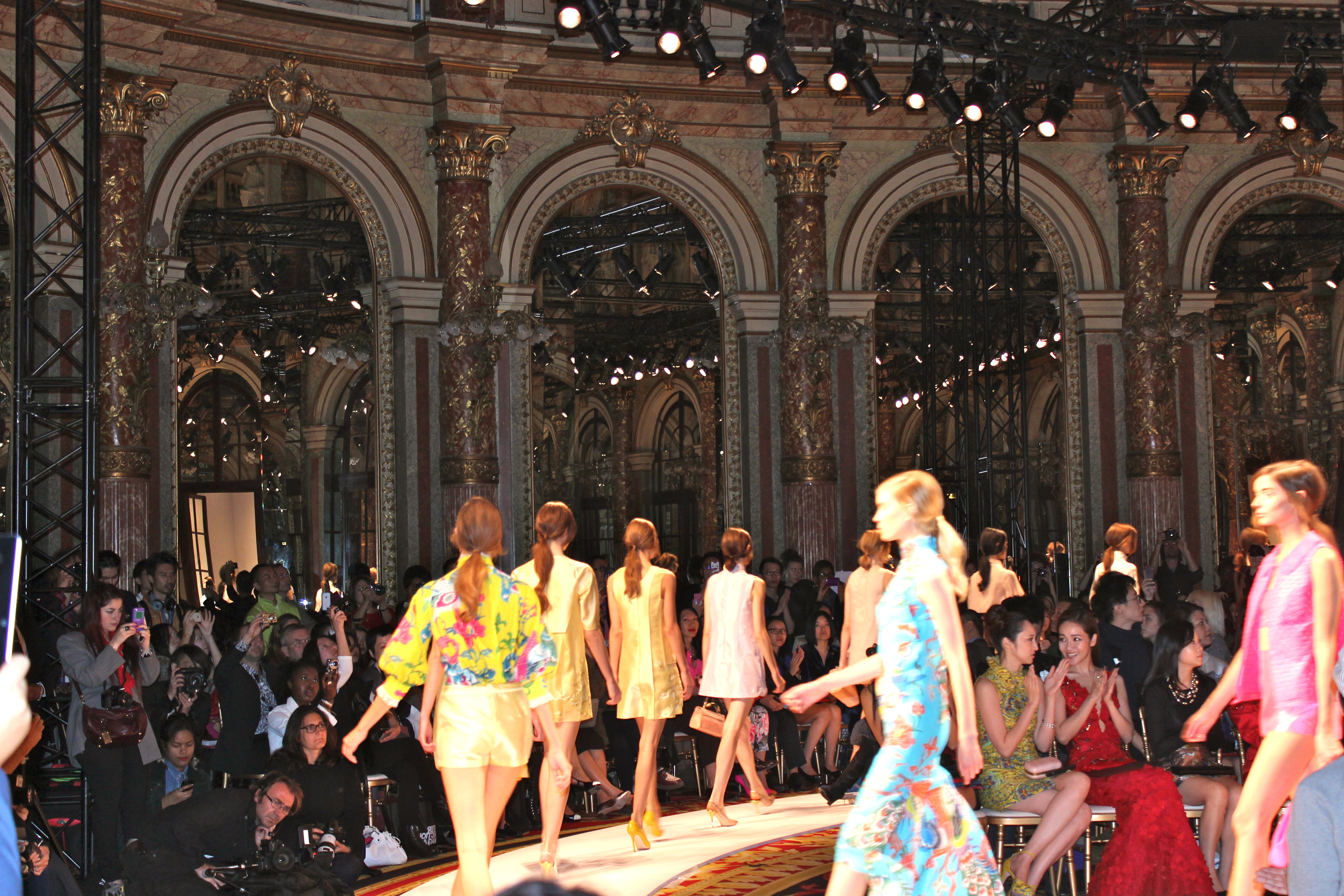 On the way home I did not want to be late for the Euro Star, I have a track record of missing flights and trains! We arrived early, two hours early to be precise. We could not believe we had to wait two hours, which would mean we would arrive in London for 1am and we were sooooo exhausted! With that in mind I heard an announcement for the next train to London boarding! So I grab Nadia (my amazing assistant) and tell here we are sneaking on the early train. Nadia was not too sure and said we could not do this, but off I drag her. The ticket man was by one of the carriages walked off for two seconds so we ran onto the train. There was not ONE spare seat anywhere. The ticket conductor was then checking the tickets so Nadia hid in the gross toilet for 15 mins whilst I walked around. The train departed and we didn’t get caught 🙂 was worth it. 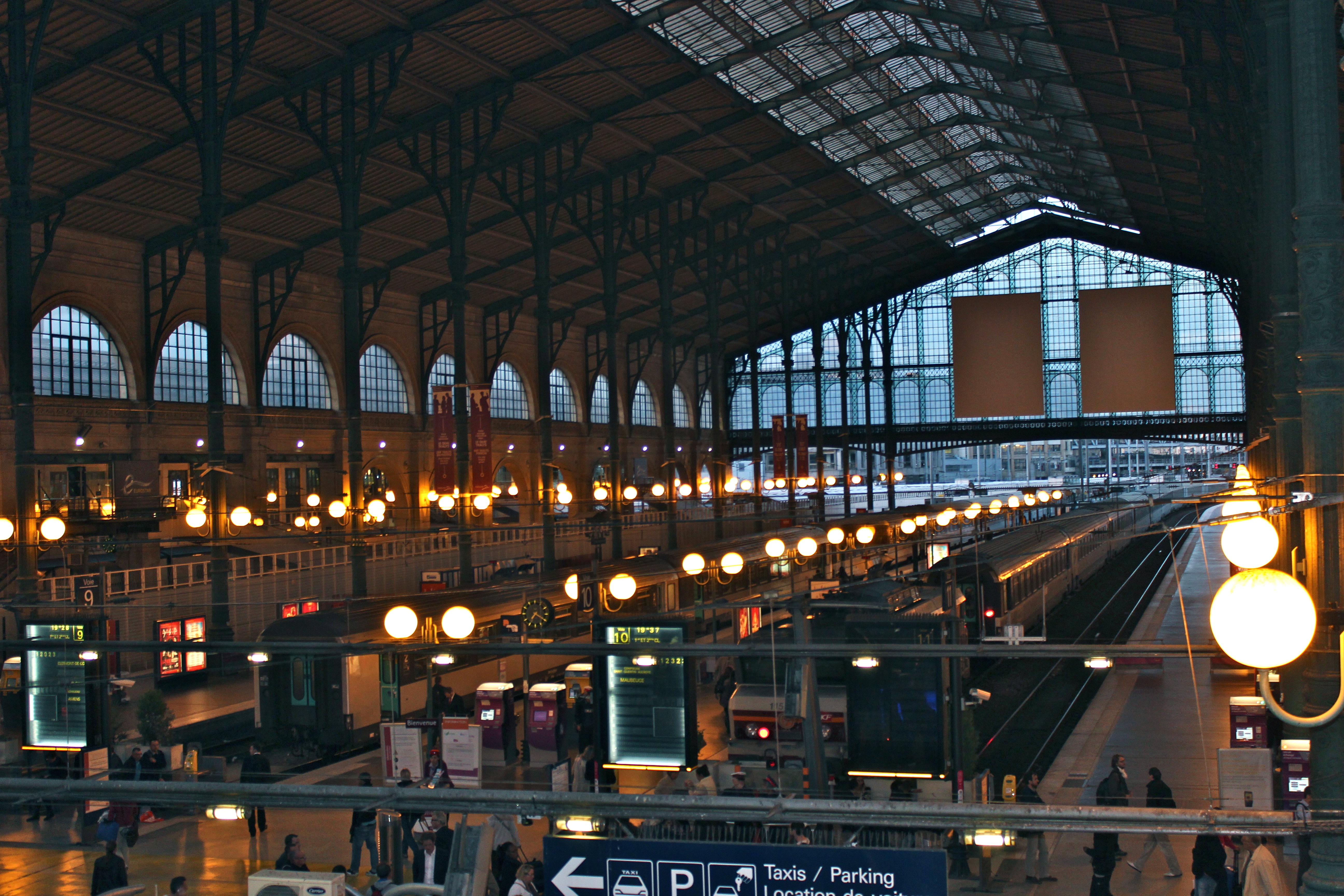 THAT REMINDS ME I had an argument on the train to Paris at 5.30am with two Australian girls for picking on two Asian men. who would like to hear the story??

Thank you. YES it really is Warehouse…bargain! It will be useful to have in my wardrobe. x

I want to hear the story of the Australian girls, your stories always make me laugh! X

the female celebrity u asked ,named 侯佩岑 (Patty Hou) , was a famous anchor before , but now she is a famous presenter of the tv show .

Ah thank you for sharing this with me xx

Gorgeous outfit along with those amazing loafers!