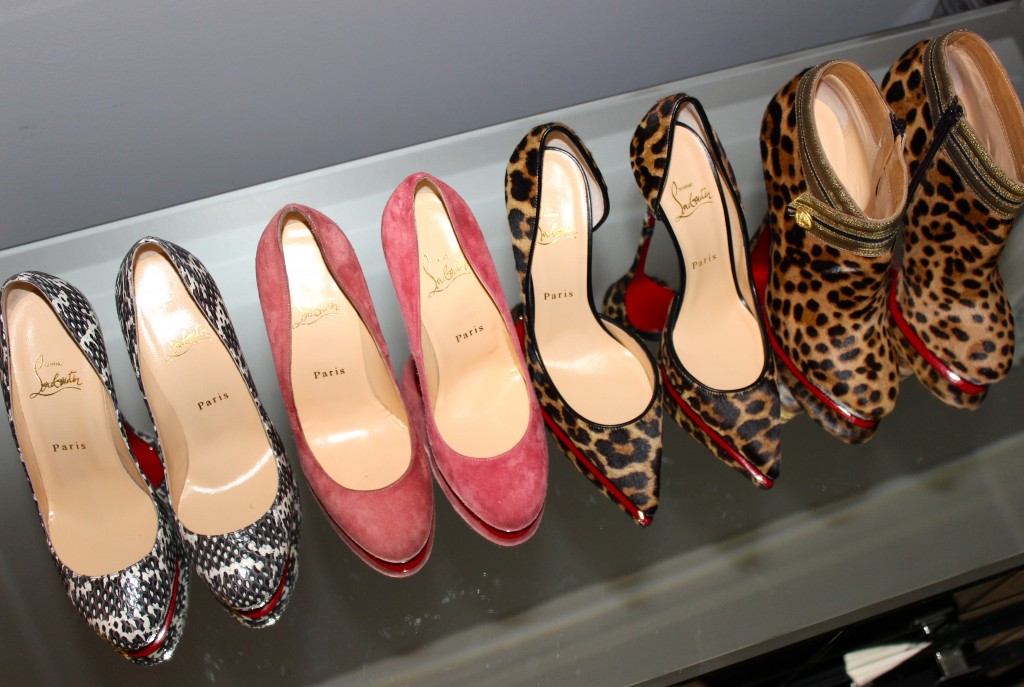 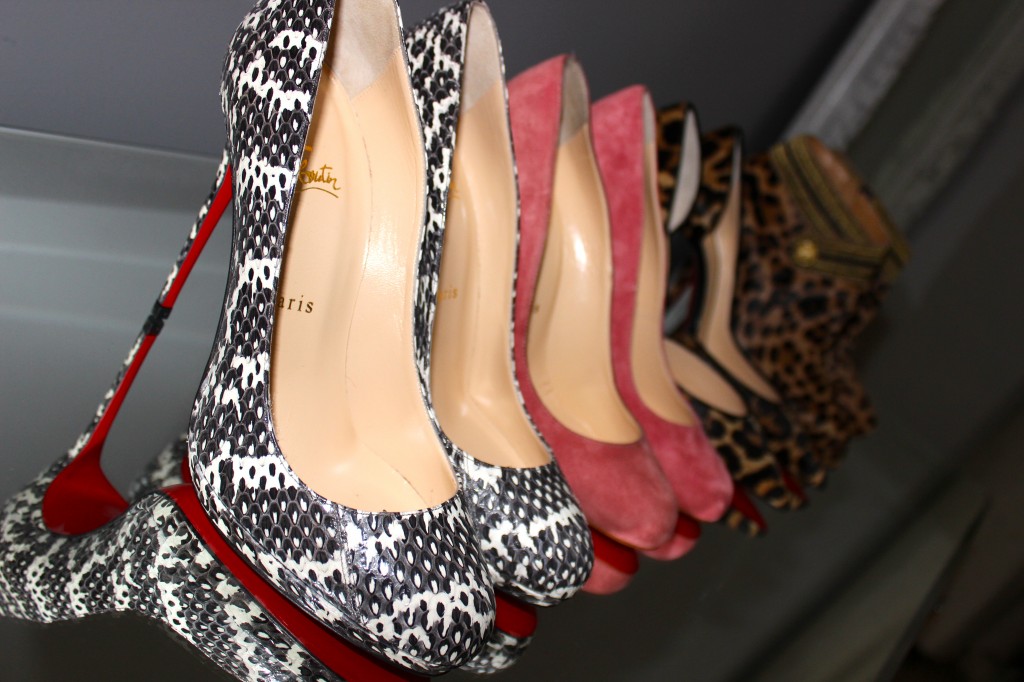 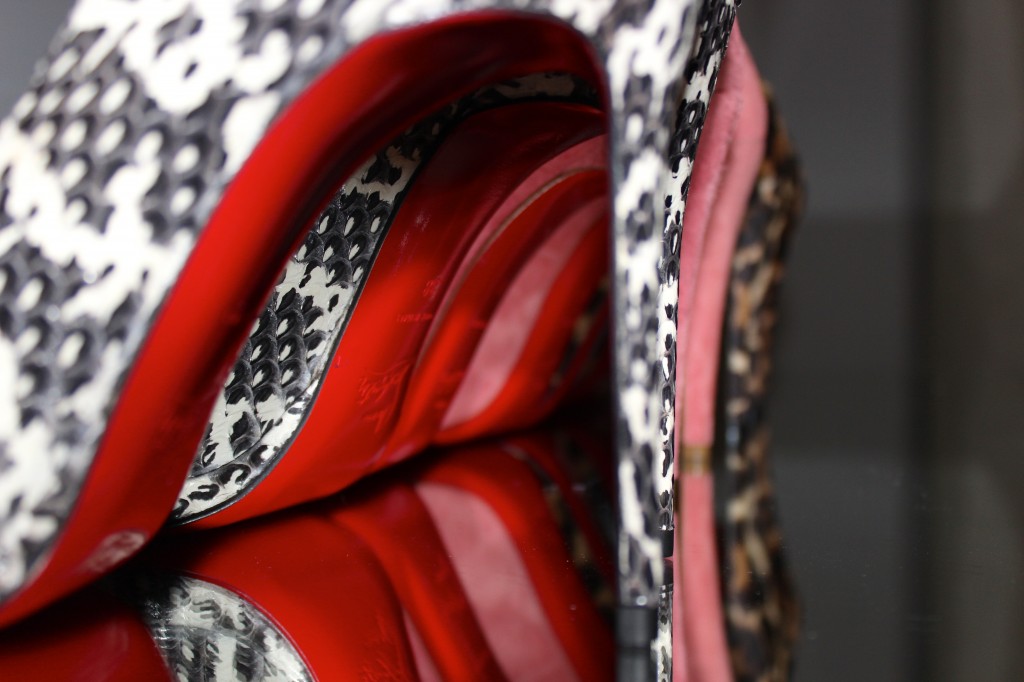 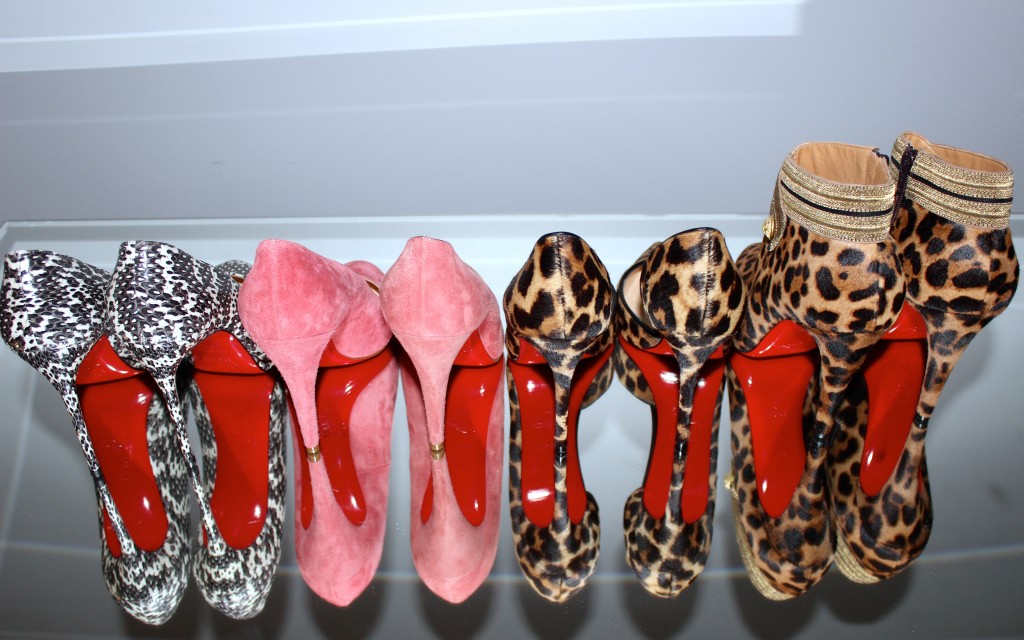 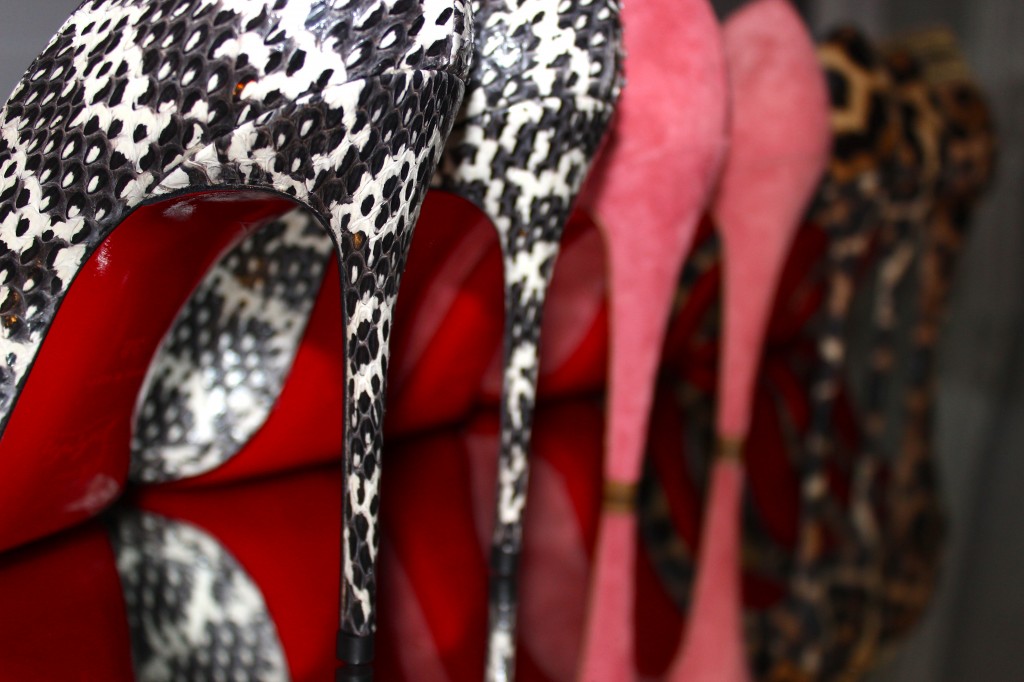 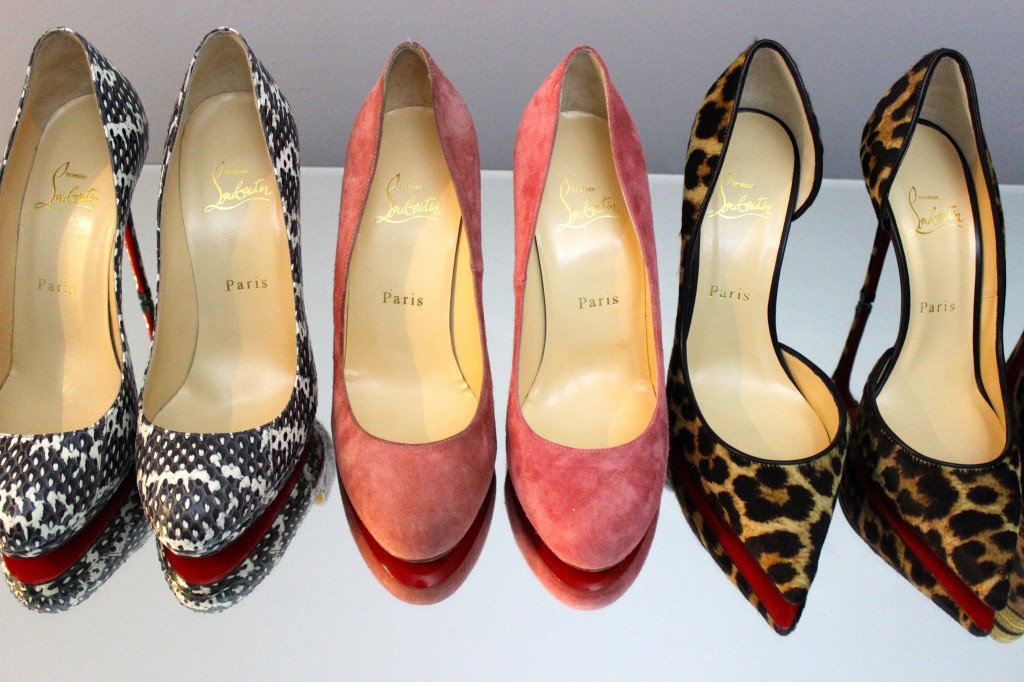 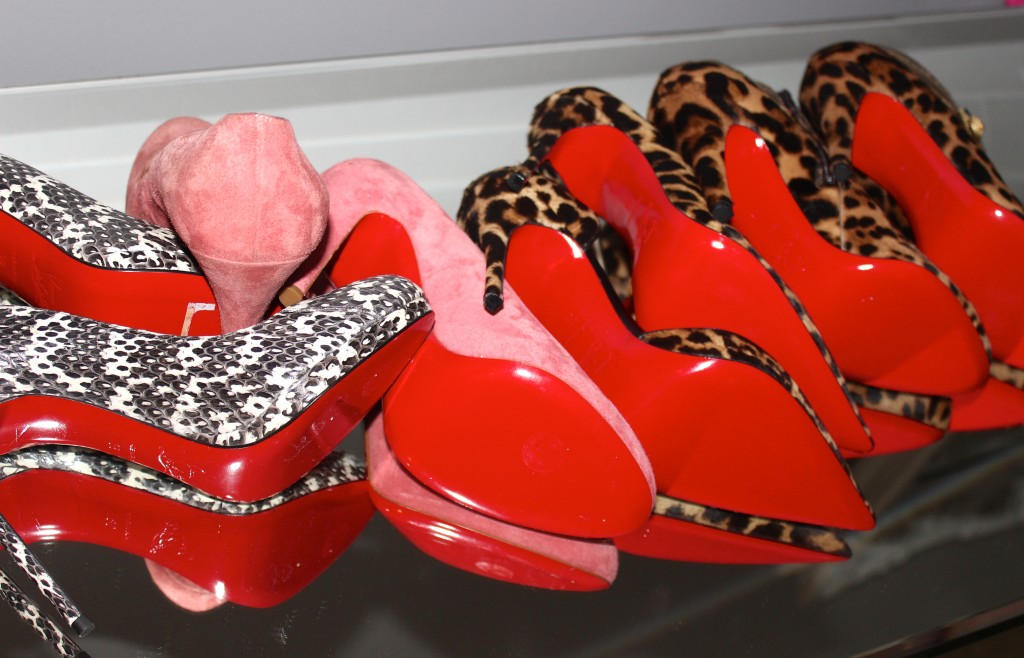 The leopard shoes were not from the sample sale, I bought these full price form NAP. The sole is still clean so I wanted to include them in the shot. 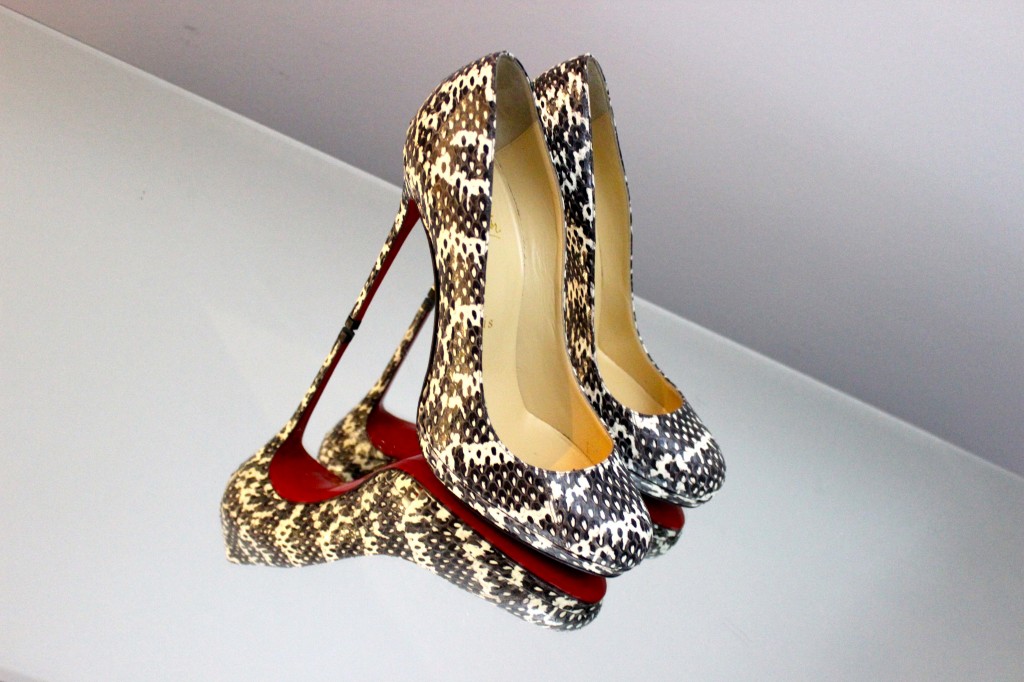 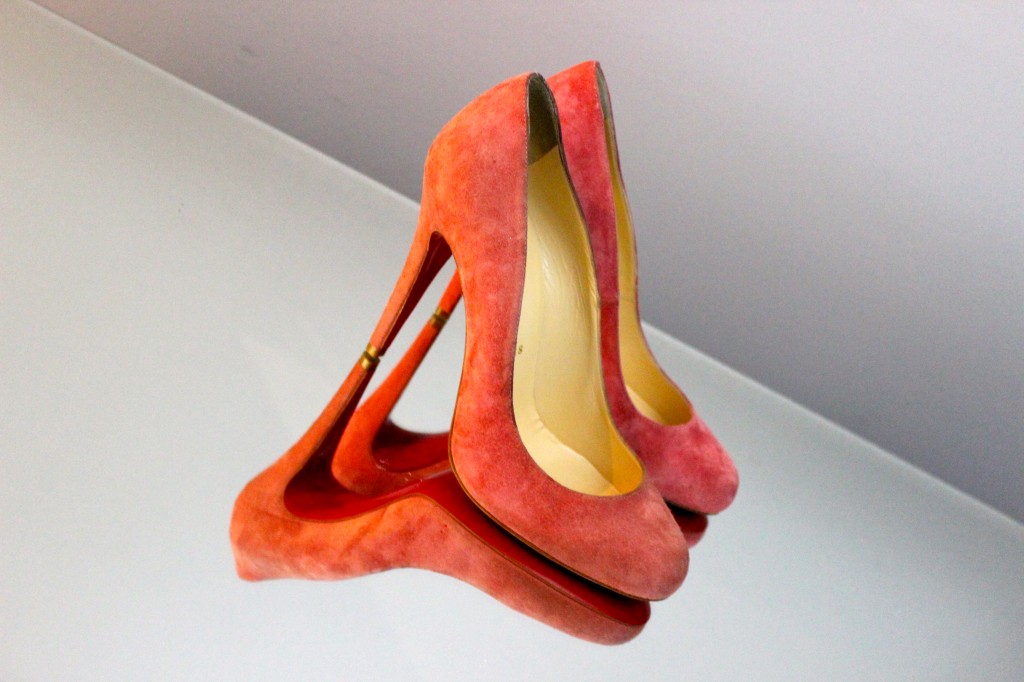 The one and only sample sale! As a blogger I get invited to a few sample sales but often never go because in the pressure of the rush I end up buying something because its cheap and end up spending a few hundred pound. I tend to avoid sample sales accept for the Christian Louboutin one, this one I will queue for hours just to get in!

Apologies for taking so long to upload this post, I took this photos the day I bought the shoes because I wanted to make sure the soles were clean and then my plan was to upload them whilst in Mauritius but the wifi connection was so weak I was unable to publish any posts. Better late then never!

The sale makes me so ill, my friend and I that go were both really ill with colds after because we had to queue outside (in winter) for THREE HOURS yes three  hours and yes I am mental and I think this proves how shoe mad I am. Last year we arrived two hours early but there was still a few people in front of us. The staff let ten people in at a time, we was meant to be in the second group but people kept pushing in; saying hi to their friends then staying in the line which really annoyed me because we were now in the third group. Just as we were about to go in a man joined the front of the queue, so I had stood there for two hours and he just pushed in. By this point I was so angry with all the other pusher inners I told  him he needed to move like now and don’ take the pi**! He actually argued back and called me rude THEN they let him in so now I am furious! Ok admittedly I was worried he might buy all the shoes and the third group would end up with the worst shoes but it was more about the fact he pushed in and I can not stand that. I argued with the girl on the door until she told him to leave. The man was told to leave, shouted at me then the crowd cheered my victory 🙂 This year I realised it is worth getting there three hours early and be at the front of the queue. I saw so many people push in but this time but I did not care because I was at the front.

When you walk in the shoes are organised but they are still piled in boxes and everyone is grabbing shoes form every where. People argue “I picked that shoe up first” normally I would watch an argument like this but in this case you don’t have the time as you have ten minutes to pick your stuff pay and go. It is really stressful and the pressure is on.  I always spend double what I planned to spend and always walk out not knowing what I have bought. The waking up at 5am, queuing for hours in the cold and the stress inside is all worth it when you go with five pairs of shoes that cost the price of one pair full price.

I will try and answer all the question regarding the Christian Louboutin sample sample that you asked my via Instagram:

* Where is the sample sale?

Each year the sample sale is in a different location, a few days before the sale I receive an invite with the times and location. The location is always in London and starts at 9am.

* Is it invite only?

The CL sample sale is invite only. The first few days are for press; magazines and bloggers. The the last day is for friends and family of the staff. You need to be on the list and bring ID.

* How much are the shoes at the sample sale?

The price ranges from £110 to £400. The shoes are in transparent bags in boxes and the boxes are separated by size. Each soles has a sticker and the sticker represents the price, you then have to follow the colour chart on the wall to see the price. Simple heeled shoes are £110 -£160, spike shoes are from £200 – £300, boots are £220 to £400 and then they always have a few pairs of really expensive shoes that are roughly 70% off. Over all the prices are very cheap!

Yes, they are bags. Last year I went and there was two Sweet Charity bags and that was it. This year they had so any bags, bags of every styles, clutches, totes, shoppers, Sweet Charity etc. The prices range from £160 – £500.

* Are the shoes damaged?

Over all I would say 90% of the stock is immaculate., accept each sample sale sole has a cross mark under the heel arch which looks like a cross mark made with a knife. Some shoes have slight marks but I think this is where they have been in the box waiting for the sale. The soles are 99% immaculate. The black ankle boots I bought had a worn sole which is why I did not include them in the photos. I did not mind because one wear and the sole gets ruined anyway. Some of the bags had marks on them but for the price it is no big deal.

* Do the bags and shoes come with dust bags?

None of the shoes or bags come with dust bags or boxes. You just get a white bag to carry them in.

* Are the shoes good or just left over crap?

With CL most of the shoes are amazing so even if they piled all the crap in the sample sale then you would still get something good. However I have seen some shoes in the Harrods sale that are so horrible and look ten years old and they are still only 30% off therefore I would say the sample sale collection is better and a lot cheaper. The collection is amazing as they are only two season sold. I saw my gold boots I bought two seasons ago from NAP which was really annoying!

* Are there plenty of sizes?

Yes, there are plenty of sizes and choices for everyone and every size.

* Is there mens and women’s?

Yes, there are both mens and women’s shoes but mostly women’s.

If you mange to get an invite next year you will no doubt see me at the front of the line so don’t be shy to say hi.

Such beauties, especially the leopards. I wish I was there to buy them.

Wow! This is shoe heaven!! Love the pairs you’ve bought – snakeskin & leopard are great investments.
You could make a killing with these on ebay!
Happy Thursday Chanelle xoxo
http://www.intotheblonde.com/

How can I get an invite? I know this post is old but I hope you can answer me as I’m really interested and I can’t seem to find anywhere how to be on an invite list. Can you please tell me how this works? Thank you!!!

It’s either through press or you have to know someone that works at Louboutin and you go as “friends and family.” You have to wait outside for hours and hours in order to get in. x