Be prepared for a LONG and over excited post!!! (and lots of these !!!!!!!) I will tell you the story in this post, the mission from beginning to end. I will then continue my post with more photos, a video upload and what I learnt from the interview. 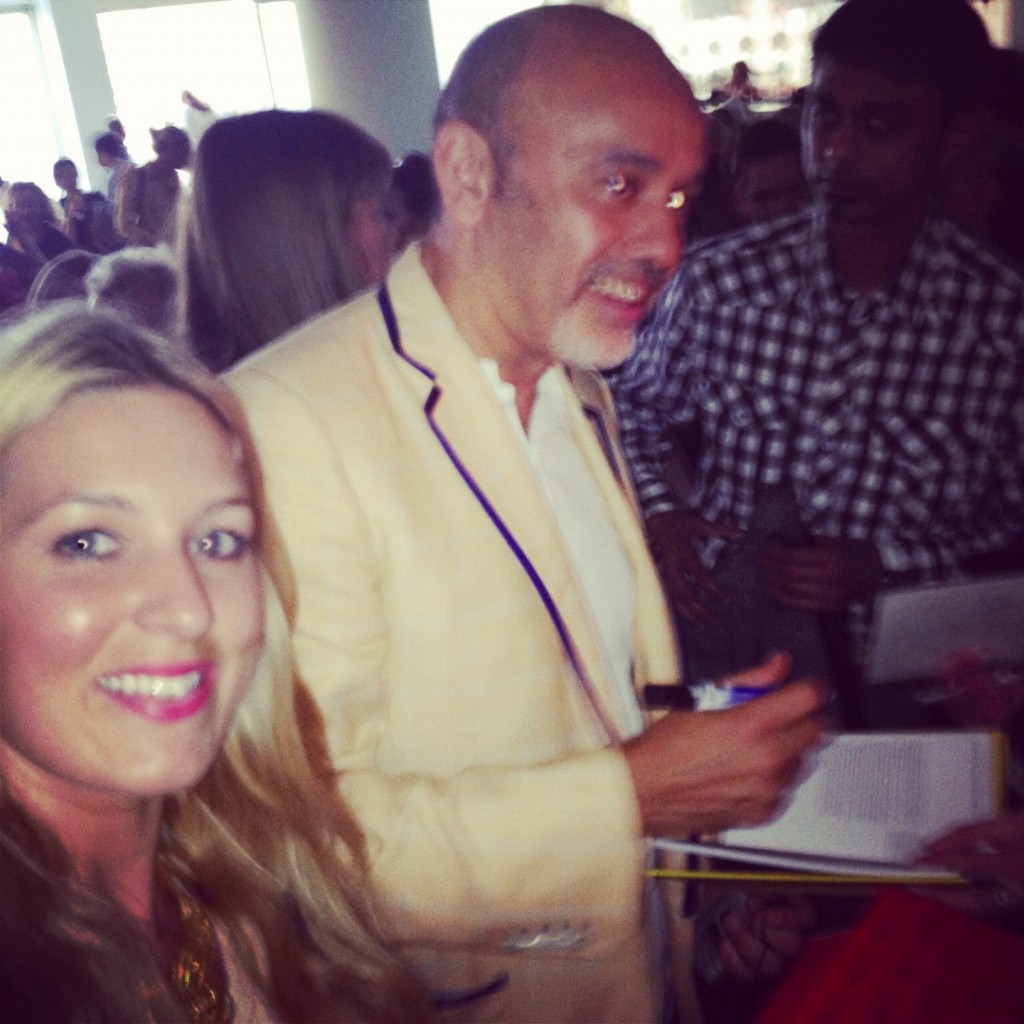 Me and Christian Louboutin

Yesterday was a dream come true for me. Yesterday is proof that passion and persistence really works. I will start from the beginning.

It all started with my normal routine. I pop into the shoe boudoir and see straight away the Loubi Zeppa wedges (part of the 20th anniversary collection.) I had to have them so of course I bought them. This was the SIGN the SIGN to what was about to happen. I will dedicate a post soon to show you the new Loubs.

An hour later I checked my usual feeds, emails and asked a few contacts if anything was happening this week. That’s when I found out there was going to be a filmed event at the Design Museum, Paula Reed (style director of Grazia magazine) was interviewing THE Christian Louboutin. WHAAAAAAAAT! How am I going to get in? How am I going to get out of work? Need to buy a ticket now! I search for tickets, everywhere is sold out. It turns out the crowd was very small. Only about 30 tickets were sold to the public the other 30 were for Louboutin press, Grazia people and media press. Honestly I was in a state of panic, I couldn’t eat, I couldn’t work, I needed to go. If you think my other stories sound like a mission, well this one is on a whole new level. 007 eat your heart out.

First step; leave work asap. Massive thank you to my amazing managers who understand how important this kind of thing is to me and let me leave work so early.  I call Paris with a list of things he needs to bring to me; my outfit, the camera, my Sweet Charity Louboutin bag and of course I had already purchased new shoes.

Next step: Call everyone I know, can you get me in. no luck there. Paris called the Design Museum first, he got an adamant NO, we then even tried to become members. I then called again I got a sneaky tip and an obvious hint. But still no invite. If you want something done, do it yourself.

Paris picks me up. The sun was shining everyone was out and of course being in central London there was lots of traffic. So there was me trying to get changed in the car half naked in my bra and knickers whereby the entire public could see me changing. I also had Paris shouting at me “You are flashing! Why are you flashing?” I was majorly panicking in the car. I still had no idea how I was going to wangle this one. But I told myself “I will get in, I will get in, don’t give up Chouquette you want to meet him too badly.”

We arrive at the Design Museum. There was a man sitting in a parking space right outside the entrance. I get out, bang on his window “Have you got a parking permit, NO you haven’t so move, Paris quick, park!” We totally don’t even have a permit either. I couldn’t care less if the car got a ticket or a clamp, tow it away for all I care right now. I run then slow down so I look less desperate. I walk straight in brazen as they come, smile at the four security guards who are telling three girls they cannot come in. I ask for a ticket. the man tells me “no tickets at all sorry.” At this point I still truly believed I was still getting in. He sends me over the the lady in charge. My last resort, actually my last resort was going to be finding a window or air vent to climb through, which I 100% would have done.

I approach the lady with my best smile. She looks me up and down. I then say a few magic words (don’t want to tell you all my secrets do I) she calls the guy over above her, I talk to him. The guy at this point was talking to another woman and her two daughters trying to get in (they didn’t get in.) Voila IM IN and I get Paris in too!!!!!!! I was literally going to combust. I walk to the front of the queue and wait. I get pulled out of the queue for a photo of myself and of my shoes. The photo was also because I was the first one in line. 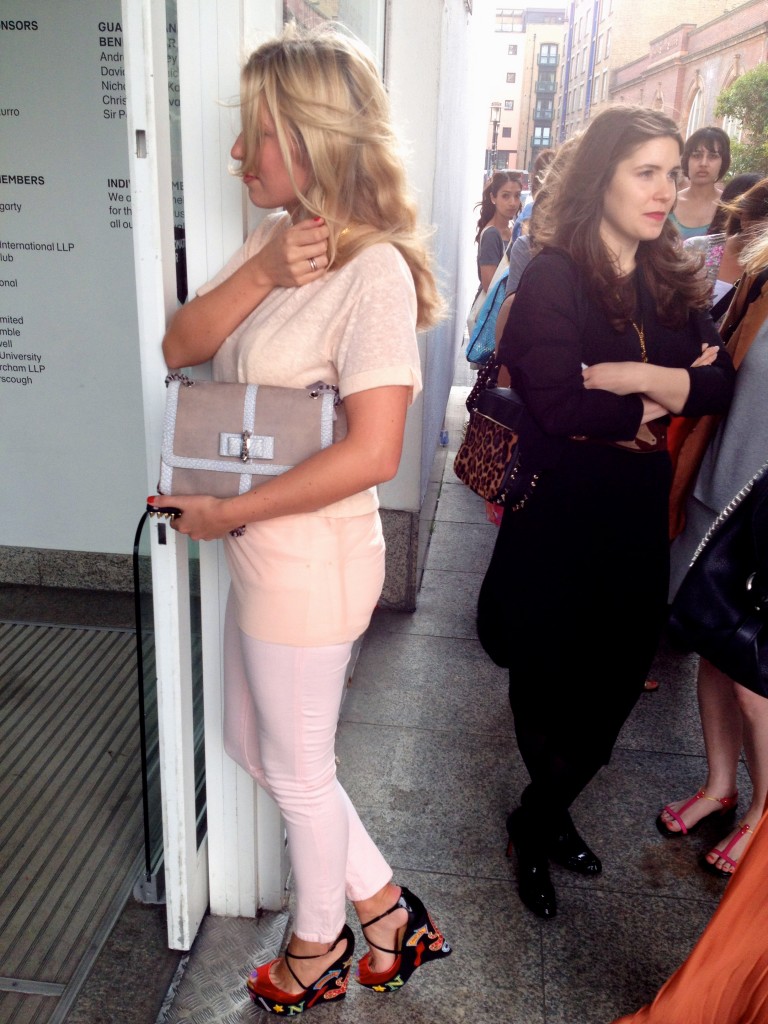 First one in the queue 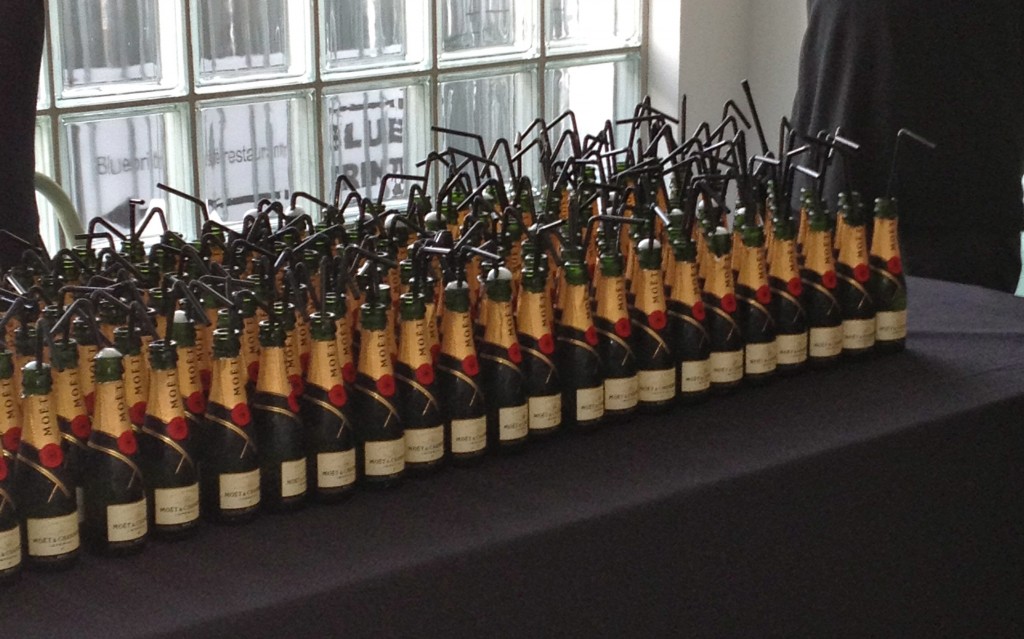 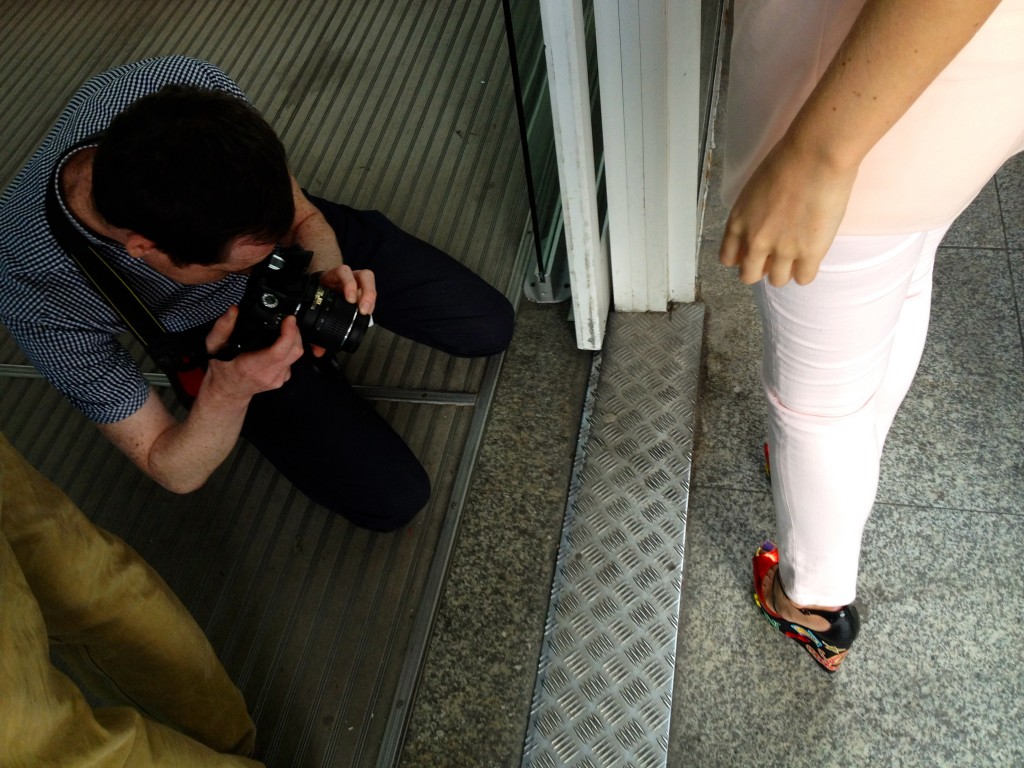 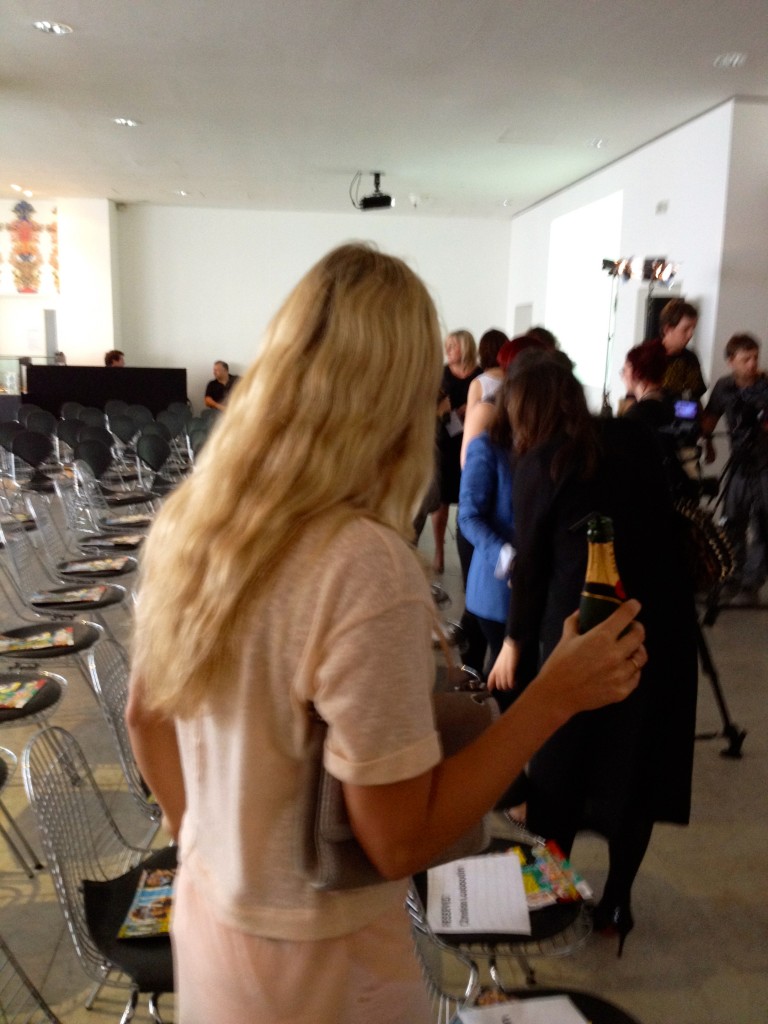 First one in after the Louboutin girls

Two seconds after I turn around and out of nowhere the queue is so long I can’t even see the end. Talk about timing and luck.

So we all go in, I am first in and I get the front row. Obviously in front of me were Louboutin press and camera men. I literally had the best sit in the house.

I had two minutes to reflect on the fact that I was in and I couldn’t quite believe not only am I here but I have the best seat. During this reflective time OMG GOOD GOD OMG OMG he’s here!!!!! I saw him in slow motion. I literally rubbed my eyes, I actually thought I was hallucinating. I had an overwhelming feeling and as silly as it might sound to some of you, I thought I was going to cry. Meeting Christian Louboutin was in the top ten things I want to do in my life! 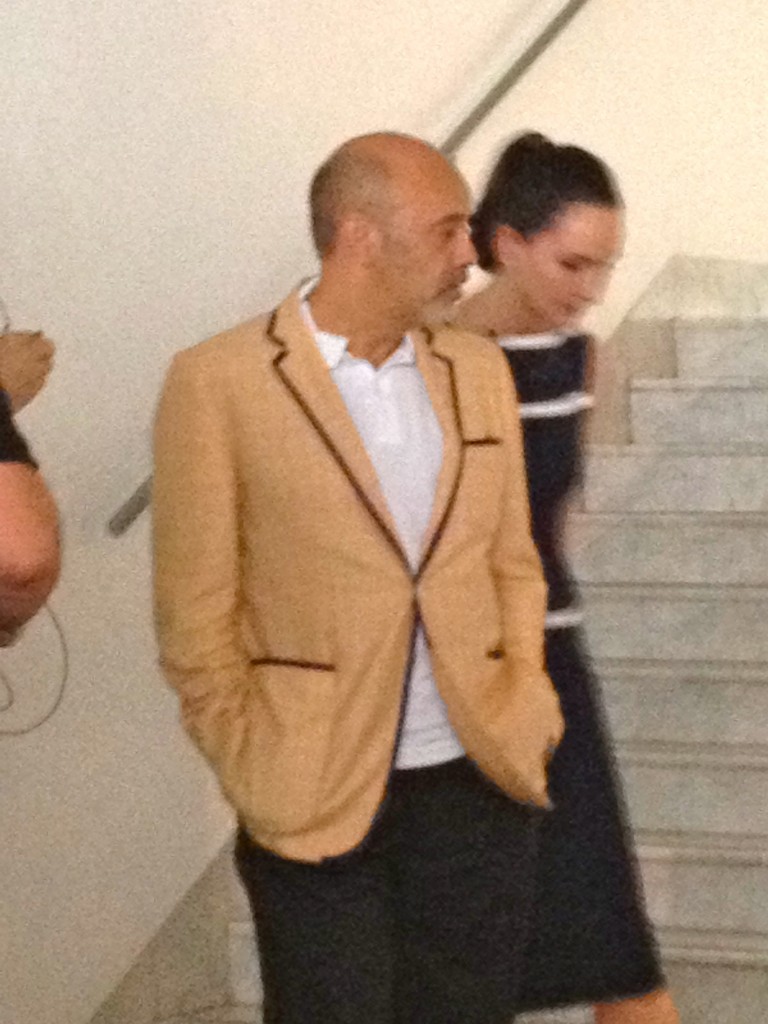 They sit down and the interview begins. I was mesmerised the entire hour and half. He truly was everything I had read about and more. He certainly didn’t disappoint me. He was funny, chatty, witty, crazy, super cute, down to earth and most of all so inspiring. 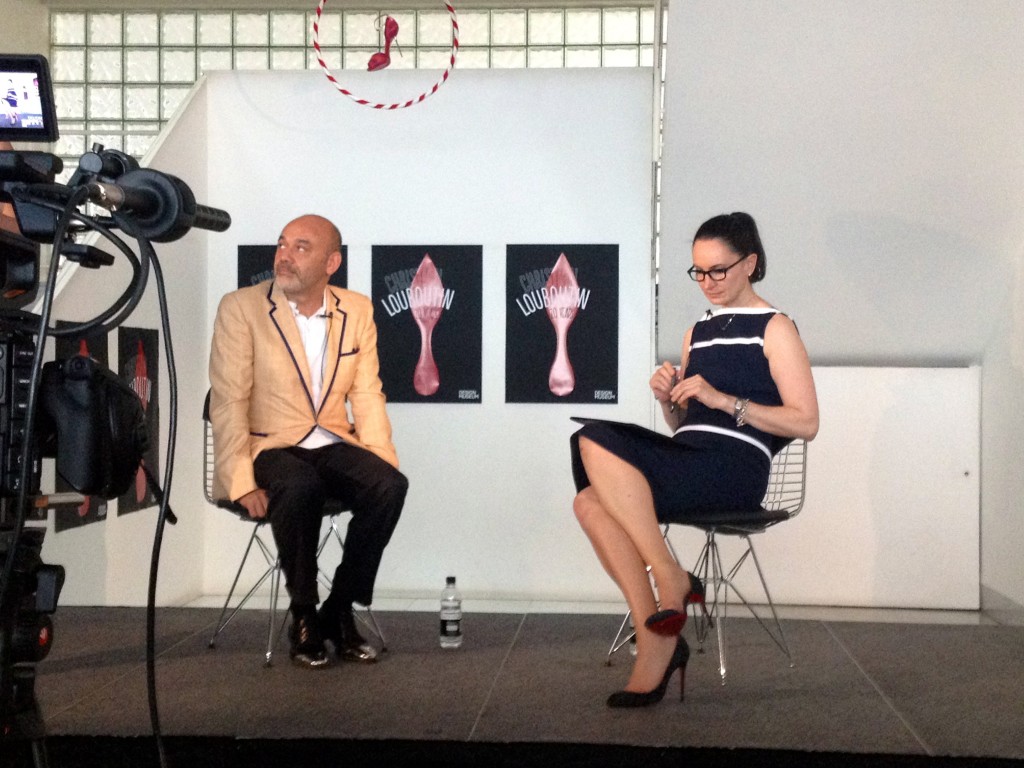 Christian and Paula. How cute is he! 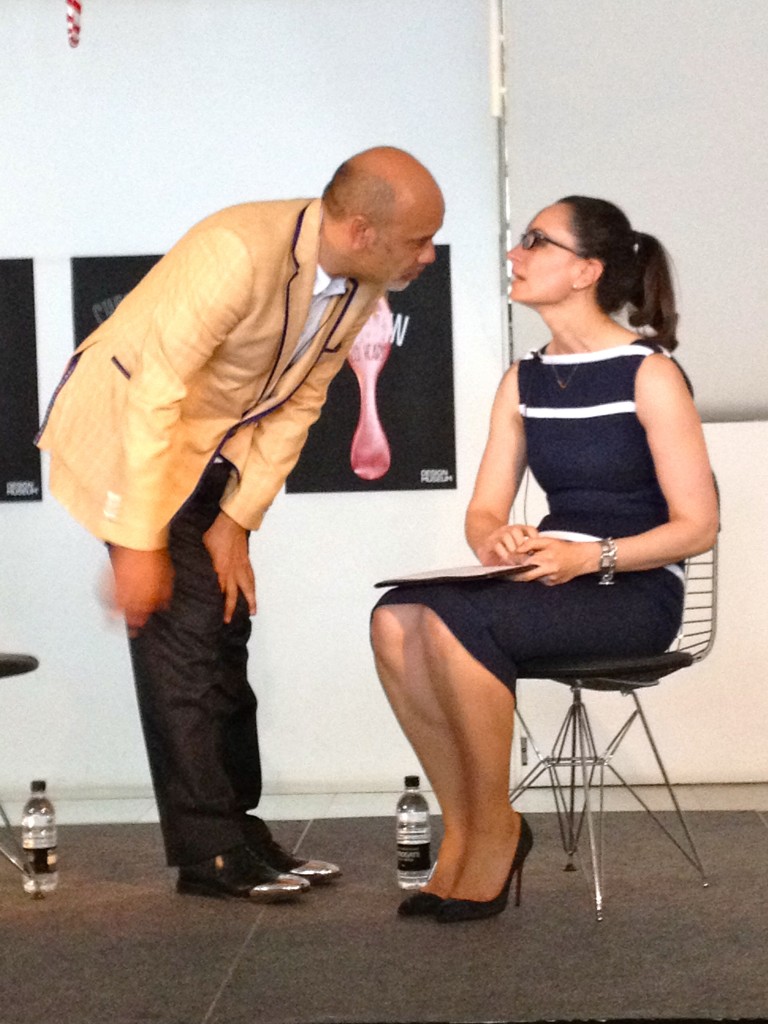 I don’t know as much about Paula Reed, I didn’t know what to expect. Paula was down to earth, gentle and approachable. Unlike other magazine directors I have met. Not mentioning no names,  ok fine I will…. Vogue.

Half way through the interview Paris asks me for my champagne. I shh him, how dare he be thinking of champagne when this is going on and how dare he interrupts.

Towards the end of the interview three people from the crowd were chosen to ask a question. I shot my hand up not having a clue what my question was. It was my time for the question. The camera man walks over and hands me the mic. Jesus Christ I was shaking. The shaking started in the ankles and slowly made its way through my entire body. I thought I was going to collapse. I wanted to ask him about the story behind the red nail polish, as I knew this was how he started the red soles. I couldn’t ask this as he had already talked about it. My killer question:

“HELLO (gigantic smile.) What I love about you and what differentiates you from other designers is that you only concentrate on shoes and handbags. Have you ever considered designing a ready to wear line? Or have you ever been approached to do so?” 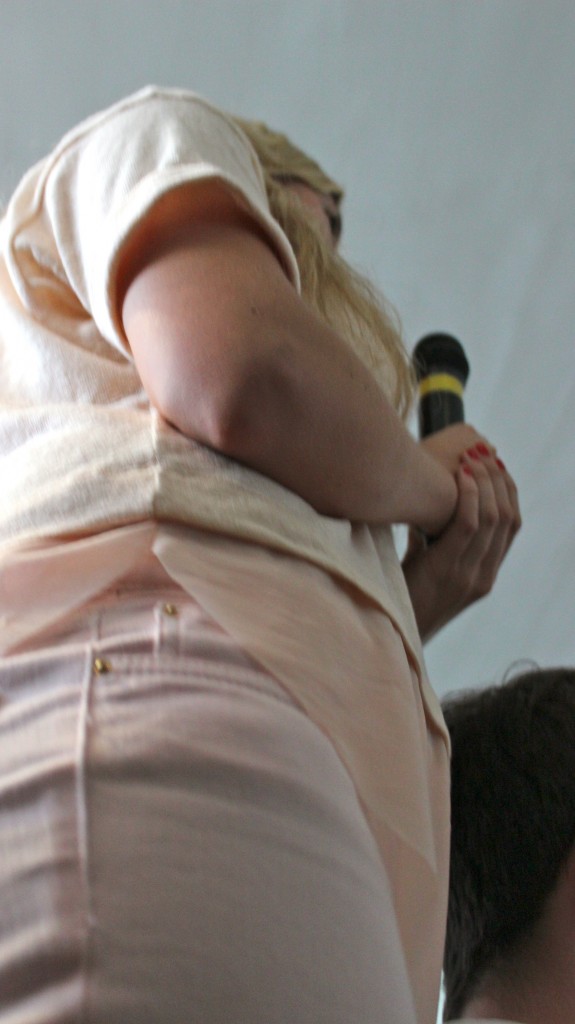 Me asking the question. Let the shaky legs commence. 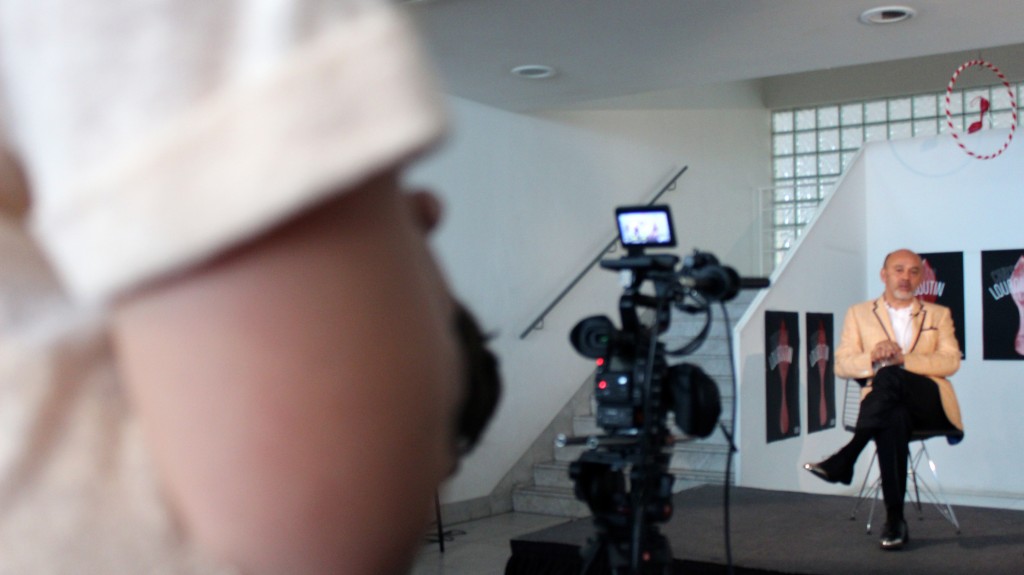 Paris describes the moment as “It was like verbal vomit” Oh dear! I clearly don’t know how to balance excitement and professionalism. I will work on that.

He answered that he has never considered it and never will. Shoes are totally different. He has been approached many times of course. He got very annoyed and pushed this person “into the corner”. They (whoever they were) tried to convince him on the grounds of Louboutin’s name is huge, the clothes will sell themselves. Christian said “Is that why you think I would launch a clothing line? Of course not.” So don’t ever expect Louboutin clothes!

The interview was over and had ran over time. I knew Christian was going to shoot off so I saw my opportunity and took it. I looked left, I looked right. The rows were packed. Only option was to go forward but the camera man was there with his equipment. Who cares! I couldn’t balance in my heels so I used the camera man’s head for support. I’m over the barrier and I run on stage. His PA tells me to get down and don’t approach him. I ignore her. I take my shoe off and literally shove it right in his face “please Christian please sign my shoe” He starts to sign the bottom and I tell him “NO that will rub off, sign the sole inside.” Paris bloody didn’t follow me and took NO photos 🙁 So I had to resort in some self iPhone snap shots. The crowd then all attempted to get on stage and a few lucky people got a book signed. 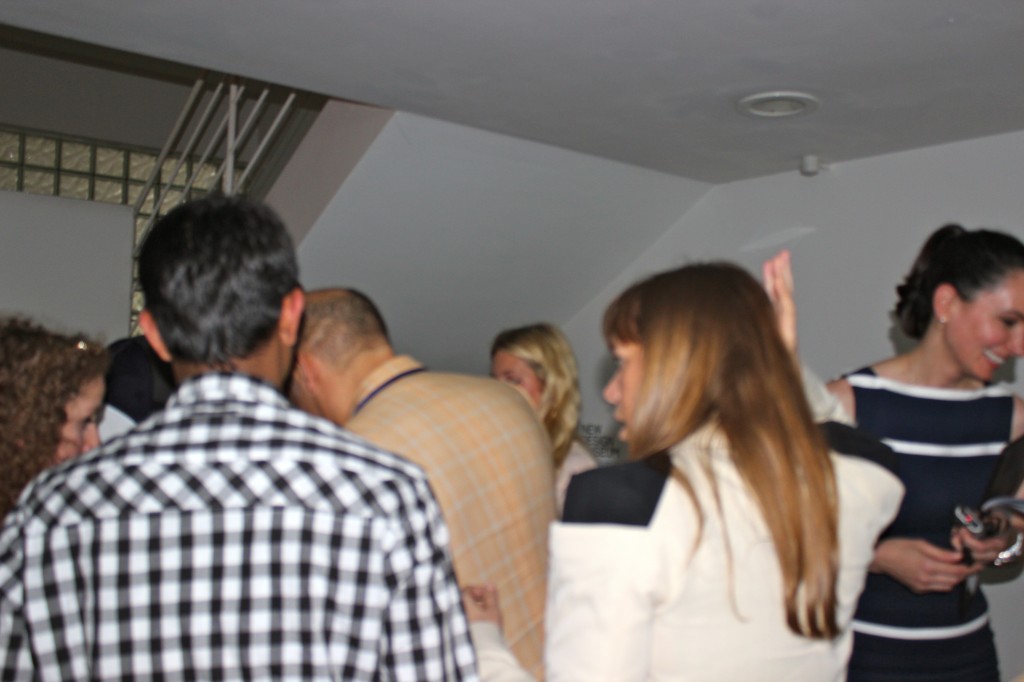 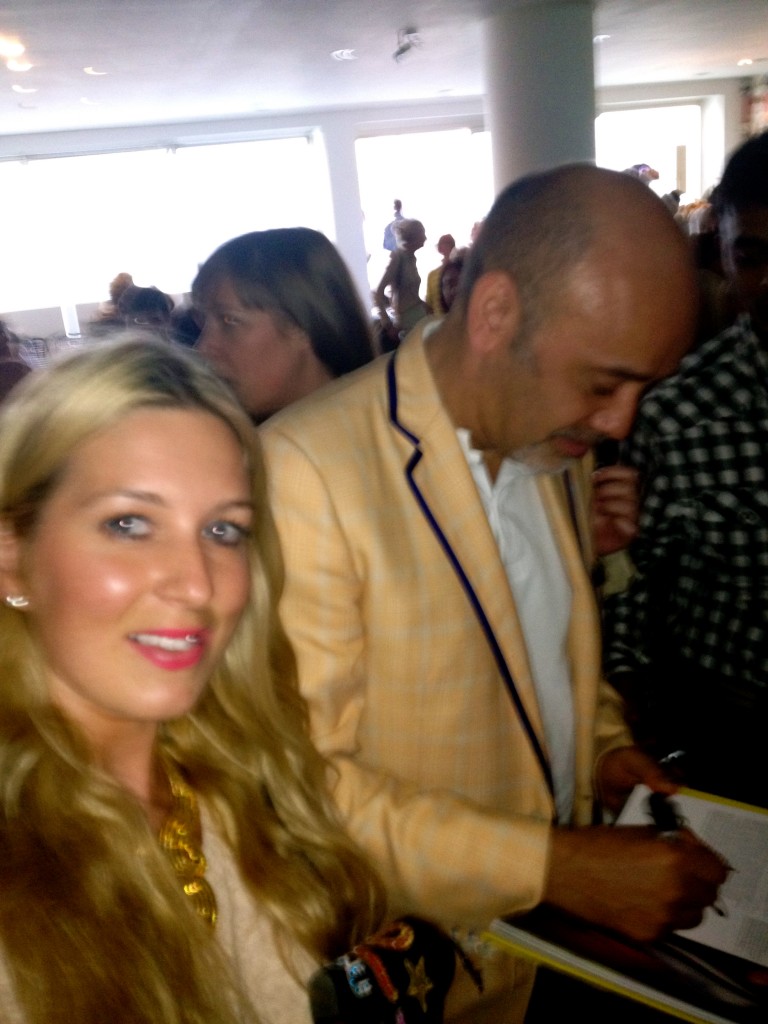 Dreams come true. The photos are blurring due to excitement! 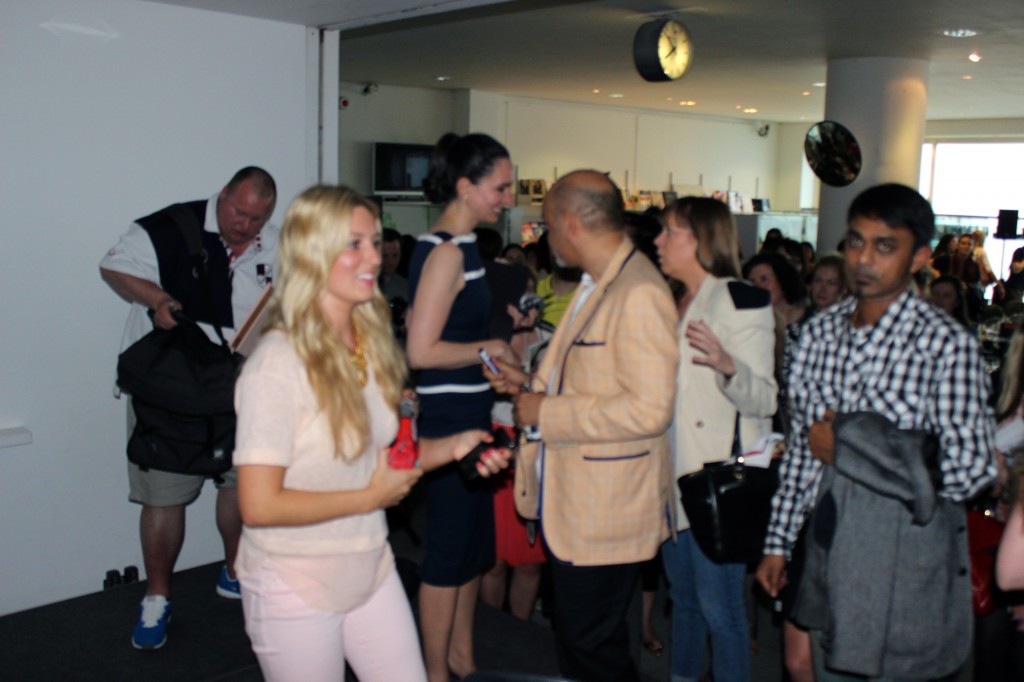 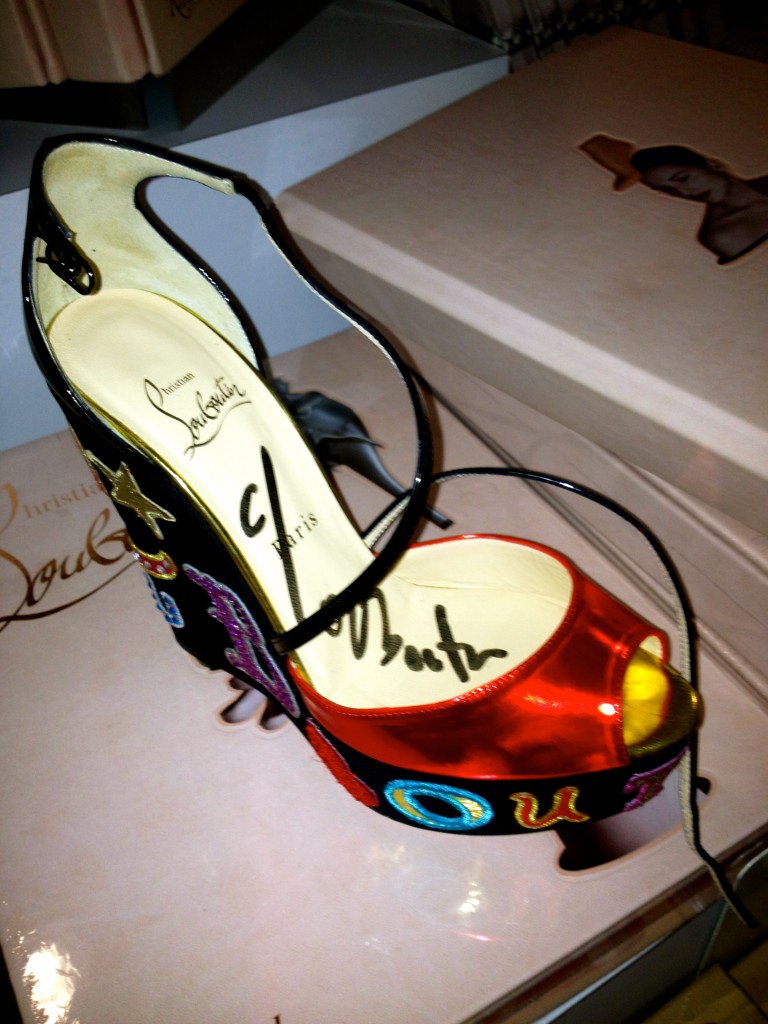 How many people can say they have a shoe signed by Christian Louboutin?

As he rushed off I had a quick chat with Paula Reed. I cannot believe how lovely and chatty she was. She was laughing and couldn’t believe I handed him my shoe. 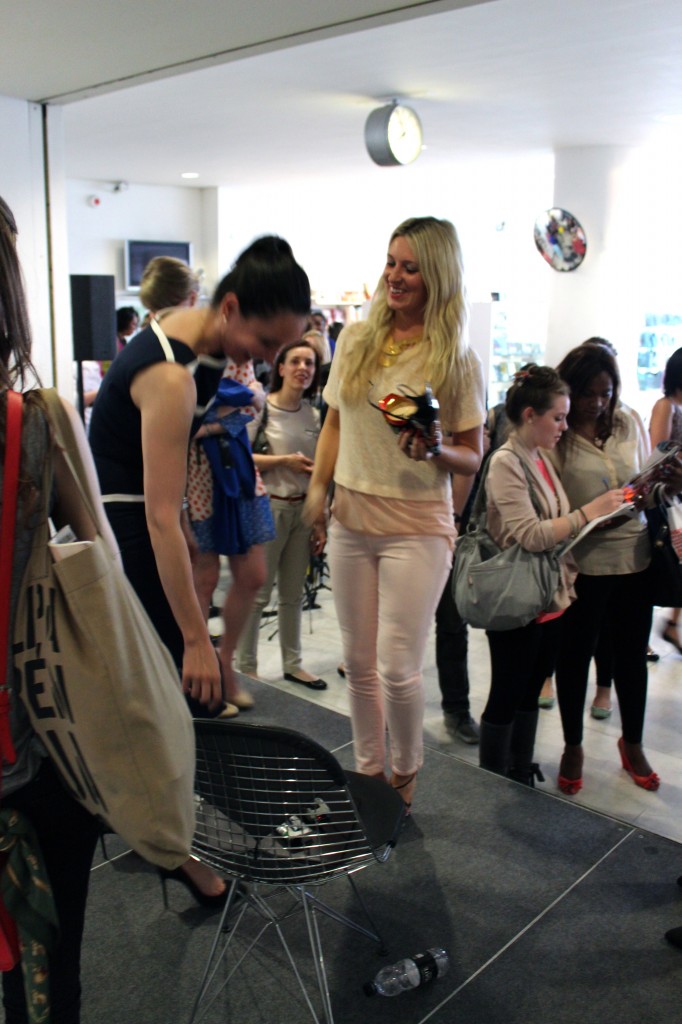 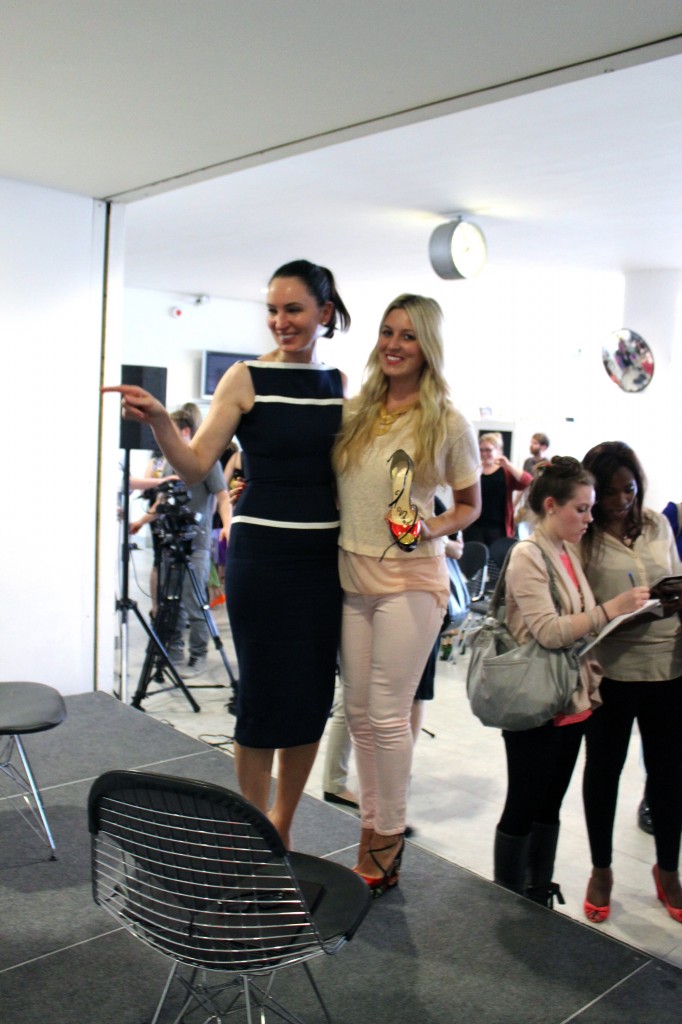 And that was that! And we didn’t even get a parking ticket.

See my next few posts for more photos, a video and what I learnt from the interview.

How to spot a fake Chanel

you lucky girl, shows if you want something that bad, GO FOR IT